Russian military exercises, the latest in a series across the country, have taken on a threatening posture. While the most recent installment is not the largest exercise Russia has conducted, the areas involved and the forces included seem to have been deliberately chosen to send a warning to NATO; the exercise itself seems to simulate a full-scale confrontation with NATO through the forward deployment of nuclear armed submarines, theater ballistic missiles and strategic bomber aircraft. Strategic weapon systems, including assets that are part of Russia's nuclear capabilities, have also been deployed to locations near NATO's borders.

According to Russian statements, the snap exercise, which was not announced before it began March 16, will last five days and will involve some 45,000 servicemen, around 3,000 vehicles, more than 40 surface vessels, 15 submarines and 110 aircraft. The more notable systems involved are the Iskander mobile theater ballistic missiles and fighter aircraft that are being deployed to Kaliningrad, Tu-22M3 long-range strategic bombers that are being deployed to Crimea, and ballistic missile submarines that have been sent to sea with protective escorts. 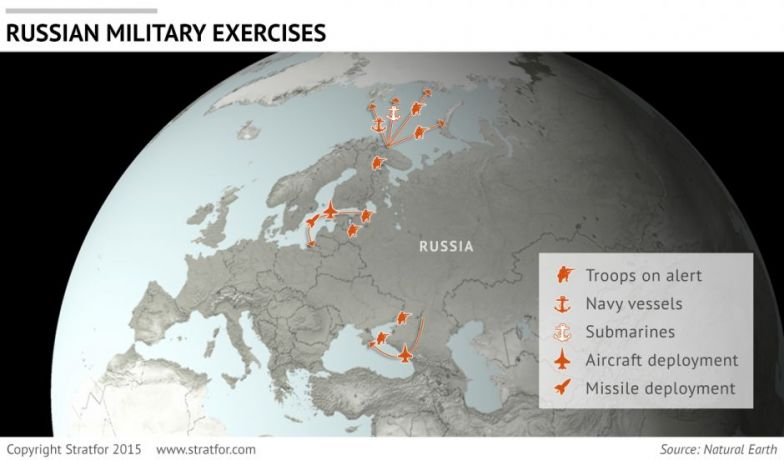 The initial statement on the exercise focused on the role of the Northern Fleet, saying the main purpose of the drill was to test deployment times to Russian positions in Novaya Zemlya and Franz Josef Land. Russia has increased its military presence in the Arctic, and the exercise highlights Russia's plans for the Arctic region. This part of the drill seems to be playing out in a rather straightforward way: Russian forces are being airlifted to Russia's Arctic bases and several naval exercises are taking place, including anti-submarine operations and mine sweeping procedures that typically precede the snap sorties of nuclear armed submarines in times of crises.

Actions Are Stronger Than Words

However, though the stated focus of the exercises is in the Arctic, operations have expanded to include military activities along the Finnish border, the deployment of strategic weapons systems to Kaliningrad and Crimea, and positions across the Baltic Fleet, Black Sea Fleet, and in the western and southern military districts. This combination lifts the exercise beyond a simple deployment of ground forces and naval exercises in the Arctic and forms a nuclear narrative.

The forward deployment of theater ballistic missiles and bomber aircraft are provocative indicators of possible pre-emptive action against NATO and Eastern Europe. Given Russia's military actions in Ukraine, the possibility, however unlikely, that the country could expand operations cannot be dismissed. For that reason, and because Russia has intentionally designed the drills to mimic a potential conflict with Europe, the exercises are cause for alarm in Europe.

By deploying Tu-22M3 bomber aircraft, Russia is also openly invoking the threat of nuclear confrontation. Considering Moscow's statements about a potential deployment of nuclear weapons to Crimea, Russia is clearly connecting the Ukraine crisis and its intentions in the Arctic to the nuclear deterrent it possesses.

The large geographic area this drill covers places it outside the usual pattern of other snap exercises conducted by Russia. It also puts it in the same areas where NATO has been conducting its exercises, including in the Baltics, Romania and Hungary. NATO's most notable drills have been conducted under the U.S. Operation Atlantic Resolve, which has seen the rotation of a brigade-sized U.S. Army force and the arrival of armor and helicopters to support that deployment. Russia has noted increased U.S. surveillance flights over the Baltics and the expanded Baltic air policing operation that NATO conducts there.

An exercise including parts of the Russian military stretching from the Northern, Baltic and Black Sea fleets through the western and southern military districts is notable. Russia has conducted even larger exercises in the past. However, those have tended to focus on a particular military district or fleet, or a combination of closely related ones. Conducting this single exercise in the area stretching from Norway to the Baltics through Poland and into Crimea is clearly angled toward NATO and its Eastern European members.

Considering the military tensions surrounding the Ukraine crisis and its fragile cease-fire, these exercises are an aggressive signal, particularly since they immediately follow Putin's mysterious disappearance last week. Russia has an interest in flexing its military muscle to remind everyone of the havoc it could wreak and to dissuade anyone from taking radical action in Ukraine. The United States has been careful when it comes to Ukraine, even delaying the deployment of 300 U.S. troops to western Ukraine as part of a training exercise. The United States maintains, however, that this deployment is still an option and could order it as early as April.

Beyond Ukraine, Russia is also responding to military exercise dynamics in Eastern Europe, where the Ukraine crisis has reverberated. A general increased tempo of Russia military activity (both in the sense of long distance strategic flights and large-scale military exercises), an increase in NATO presence and more exercises in Eastern Europe have resulted in a back and forth of military posturing reminiscent of Cold War shows of force.

In that context, Russia's exercises serve as threats to the opposing forces, demonstrating capabilities and suggesting intent. But they are important military tools to the Russian military as well. To maintain readiness, actually executing operations or deployments through exercises is a must. Beyond that, Russian military planners need to have a realistic understanding of the capabilities of Russian forces. There is no better way to gain this understanding than to let those forces run through operations, or parts of them, to determine the basic parameters that are feasible. As Russia tests its own capabilities, it shows the rest of the world the type of operations and the military districts it considers key in its strategic planning.