Editor's Note: The following is the first installment of a three-part series on growing debt for Russia's regional governments.

Russia is so large that the Kremlin lacks the resources to run each region of the country directly. Currently Russia is split into 83 regions of all shapes and sizes, which fall into categories of oblasts, republics, krais, federal cities and autonomous okrugs. Historically, the Kremlin has given regional leaders (mayors, governors, heads or republic presidents) the power to run their own regions and ensure loyalty to the Kremlin and stability for the country.

However, the Kremlin is constantly concerned with its control over the regions. The federal government's ability to maintain the loyalty of each region has been tested often throughout history. For instance, dozens of regions attempted to break away after the fall of the Soviet Union, occasionally leading to wars such as those in Chechnya.

The central government's control over the regions was demolished during the devastating financial crisis in 1998. Many of the regional heads defied the federal government in order to look out for their own regions' survival. It was the second-worst regional breakdown in Russia following the collapse of the Soviet Union, and it was related directly to the chaos caused by that collapse. This is why the currently growing economic strains in the regions will be of great concern for the Kremlin.

Most of Russia's regional governments have always had some level of debt, but resource-based export revenues have kept it mostly manageable since the 1998 crisis. However, since the 2008-2009 financial crisis, most of the regions' debt has risen by more than 100 percent — from $35 billion in 2010 to an estimated $78 billion in 2014, and Standard & Poor's has estimated that this will rise to $103 billion in 2015. Russia's overall government debt — the federal and regional governments combined — is around $300 billion, or 14 percent of gross domestic product. This is small for a country as large as Russia, but the problem is that so much of the debt is concentrated in the regions, which do not have as many debt reduction tools as the federal government does. 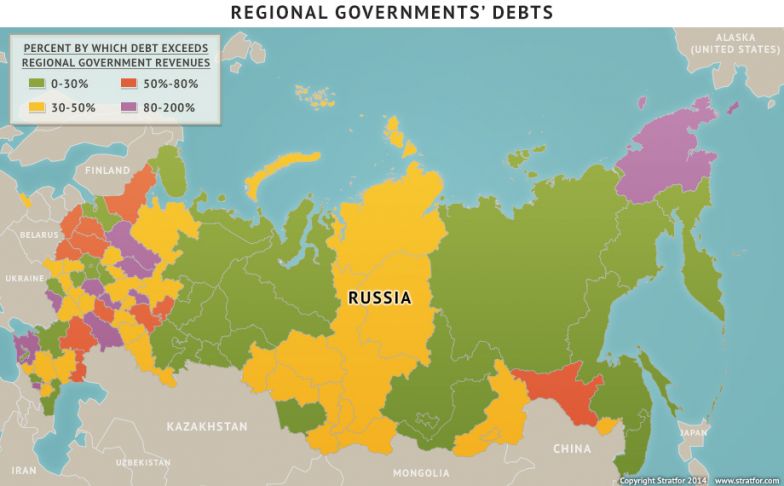 Of the 83 regional subjects in Russia, only 20 will be able to keep a budget surplus or a moderate level of debt by 2015, according to Standard & Poor's calculations. This leaves the other 63 regions at risk of needing a federal bailout or defaulting on their debt. 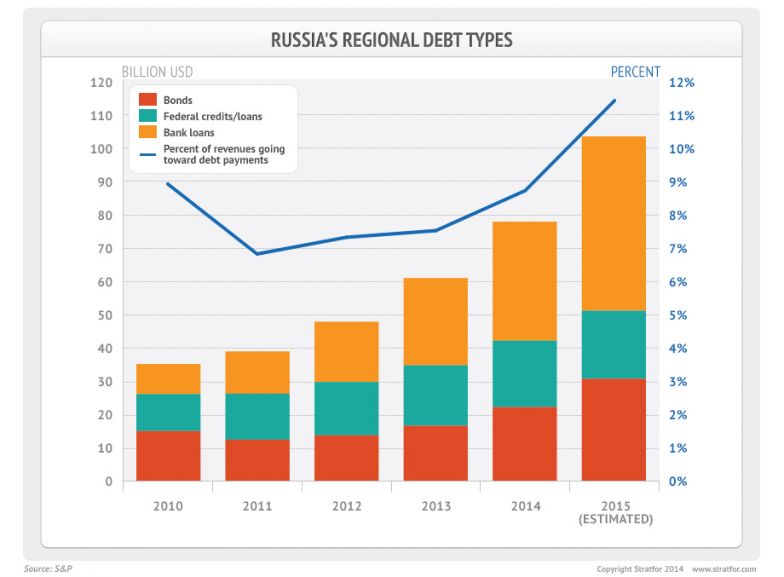 Currently, the Russian regions are financing their debt via bank loans, bonds and budget credits (federal loans, for example). Each region has to get federal approval to issue bonds, because regional bonds create more market competition for the federal and business bonds. Most of the banking loans to the regions carry high interest rates and are short term (mostly between two and five years). The federal loans come with much lower rates and longer repayment schedules (mostly between five and 20 years), so naturally federal credits and loans are more attractive for the local governments, though unprofitable for the federal government. The issuance of federal credits or loans to the regions in 2013 was limited; initially, Moscow said it would issue $4.8 billion in new credits to the regions in 2013, but only issued $2.4 billion due to its own budgetary restrictions. This is one contributing factor to the dramatic local-government debt increases.

The next contributing factor to the rise in regional debt is the overall economic stagnation that has plagued Russia since the 2009 financial crisis and subsequent stimulus aimed at pulling Russia out of the crisis. Despite high energy prices all year, Russia's gross domestic product growth slowed dramatically in 2013 to 1.5 percent growth after an initial 3-4 percent growth target by the Kremlin at the start of that year. This is low compared to the 7-8 percent growth seen yearly in Russia in the mid-2000s. Most analysts believe the only way Russia's growth remained positive was through its large energy revenues, which make up half of the federal government's budget and 20-25 percent of the country's gross domestic product. 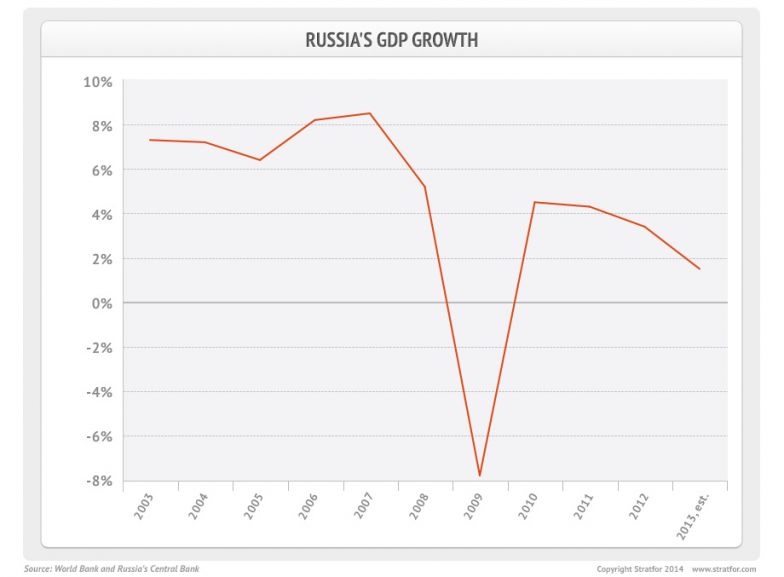 There are a handful of reasons for Russia's economic stagnation. First, investment in Russia was lower than expected in 2013. Fixed investment was down 1.8 percent year-on-year in the first 10 months of 2013, compared with a 9.1 percent year-on-year growth in the same period in 2012. Private sector outflows of capital were high in 2013, with a net outflow of $48 billion leaving Russia in the first nine months of 2013, compared with $46 billion for the same period in 2012. Moreover, the investment sentiment in Russia is poor at the moment, as the Central Bank of Russia has begun closing some 800 smaller banks in a consolidation. Many of those banks were regionally based, and their closure is making investment in the regions less attractive.

Lower investment, coupled with less corporate borrowing and a decline in demand in many sectors, such as metals, led to lower industrial production. In the first 10 months of 2013, industrial production was flat compared with 2.8 percent growth in the same period in 2012. Industrial production is region-specific in Russia; industry provides nearly the entire economy in some regions. Thirty-one Russian regions, including Komi and Barents, had negative industrial production indexes for 2013. This could get worse in 2014, as many of the metals giants are planning to continue shutting down plants due to a lack of demand and low prices. For example, the world's largest aluminum producer, Rusal, is shutting down five aluminum plants in the Volgograd, Karelia, Leningrad and Urals regions and laying off tens of thousands of workers.

Another factor contributing to the regions' rising debts is increasingly burdensome obligations to the federal government. Of the income generated in a particular region, only 37 percent of the income stays in that region and the rest goes to the federal budget. The federal government does return some of the funds to the region in the form of subsidies and intergovernmental transfers, but not more than 20 percent. The amount of income that the Kremlin has taken from the regions has increased 12 percent in the past three years (via increases in taxes and decreases in subsidizations), leaving less and less for the regions to work with.

There has also been a large outcry from the regional governments in response to a series of presidential edicts that Vladimir Putin declared when he was re-elected to his third term in late 2011. Putin ordered the regional governments to do a series of tasks, such as replace all dilapidated housing by 2014, and to raise regional and municipal salaries by 7-10 percent in 2014 and another 10 percent in 2015. The regions are calling these "unfunded mandates," as the federal government is not helping the regions pay for these projects. Already, the Kremlin has had to postpone the housing replacement edict to 2016 due to lack of funding in the regions, but the salary edict remains in place and is estimated to cost the regions $56.6 billion over the next two years.