Russia's Invasion of Ukraine Will Cause Western Sanctions, but Not Intervention

Black smoke rises from a military airport in Chuguyev near Kharkiv on Feb. 24, 2022.

Russia's decision to launch a large military operation in Ukraine early Feb. 24, hitting targets across the country, including the capital Kyiv, will see Western countries impose significant sanctions on Russia, but their direct military involvement is unlikely. In a TV speech announcing the attack, Russian President Vladimir Putin said the plan is not to "occupy" Ukraine but to "demilitarize" the country, which he described as a threat to Russia. While Putin described the operation as necessary to defend the separatist republics in Donbas, one of Russia's main goals seems to be to oust the Ukrainian government, which he described as a "regime." Russia's initial actions involved missile, artillery and air attacks in coordinated moves launched from areas including Crimea in the south, Belarus in the north, and the Ukrainian separatist republics in the east, which targeted Ukrainian military infrastructure and border positions. Three hours after the start of the attacks, Moscow claimed to have "neutralized" Ukraine's airbases and air defenses and videos widely shared online show Russian forces moving throughout the country. 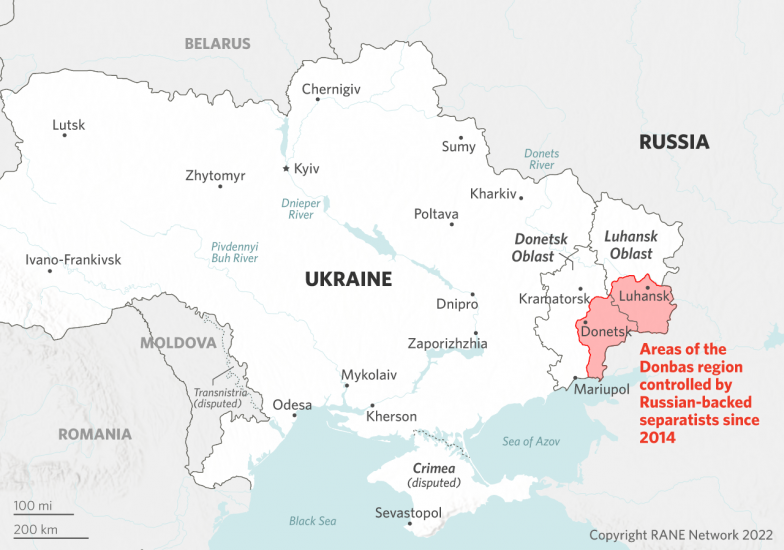 Russia's apparent goal of overthrowing the Ukrainian government suggests that the military actions could last for several days and include a ground incursion to take Kyiv, which could significantly increase the number of casualties. While the Russian government said it would not target population centers, if Moscow's goal is to depose the Ukrainian government to replace it with a pro-Russian administration, an attack on Kyiv is possible. As Russian tanks have entered Ukraine from points north, east, and south of Kyiv, an attempt to take the capital could happen in the coming hours. This would severely increase the casualties of the conflict, especially in the case of urban warfare.

The West will impose heavy sanctions on Russia, but direct military involvement to expel Russia from Ukraine is improbable. The United States, the United Kingdom and the European Union condemned Russia's attacks and promised to impose additional sanctions against Moscow. In recent weeks, Washington, London and Brussels have worked on sanctions targeting Russia's banking and energy sectors and banning exports of technology and other goods. The West has so far refrained from implementing these sanctions, opting instead for a gradual approach. Russia's recent actions mean, however, that some punitive measures that seemed improbable before Feb. 24 will now be on the table. The sanctions could also include Belarus because some of the attacks took place from its territory, where Russian troops have also been staged since joint military exercises earlier this month. While Western governments are also likely to accelerate their transfer of weapons to Ukraine, they will probably not get militarily involved in the conflict to avoid a direct military confrontation with Russia that could escalate to other parts of Europe.

While an increase in the arrival of refugees into the European Union is likely and retaliatory Russian measures like cyberattacks are probable, the expansion of direct military conflict beyond Ukraine is improbable. In the coming days, countries including Poland, Romania, Hungary, Slovakia and Moldova will probably see an increase in the arrival of Ukrainians escaping their country and multiple Western states and companies could see disruptive cyberattacks, judging from Russia's past actions. While some countries in the region have declared a state of emergency, kinetic conflict is unlikely to extend beyond Ukraine because Russia is not interested in a regional war and its primary focus is to supplant Ukraine's sovereignty and install a pro-Russian regime. More importantly, most of Russia's neighbors in Europe are NATO members and therefore covered by the alliance's Article V clause of collective defense.