While the al-Houthi movement struggles to manage multiple regional challenges to its north, its rise to power in Yemen is a setback for Saudi Arabia on its southern flank. After the fall of the Yemeni government, Riyadh will have to capitalize on the al-Houthis' need for political and financial support to re-establish its influence in the country. But because Iran is trying to fill that support gap, too, Yemen has become another battleground where the two sectarian rivals will struggle against one another.

After being driven from the capital of Sanaa in September, Yemen's government is at war with itself. President Abd Rabboh Mansour Hadi issued a statement March 19 denouncing the airstrikes on his compound in the southern port city of Aden as an attempted military coup by forces loyal to his predecessor and one-time ally, former President Ali Abdullah Saleh. Earlier that day, soldiers and militiamen loyal to Hadi battled their way into Aden's airport and stormed a nearby military base, both of which were under the control of Gen. Abdel-Hafez al-Saqqaf, a Saleh loyalist.

The infighting in Aden comes after Ansar Allah, the pro-Iranian Zaidi group led by Abdul-Malik al-Houthi, emerged as the single largest force in the country after taking over large swathes of territory in north and central Yemen. The al-Houthis represent a change in the balance of power in Yemen and even the Arabian Peninsula that has opened the door for Iran to become a major player in what was the exclusive domain of Saudi Arabia not too long ago.

The Rise of the al-Houthis

A number of factors facilitated the al-Houthis' power grab in Yemen. First, Saudi Arabia's attempts to manage the Yemeni government in the wake of Arab Spring protests did not go as planned. Saleh stepped down in favor of his one-time vice president, Hadi, but the move exacerbated intra-government fissures along tribal, ideological, political and military lines. By the time Hadi took over, Riyadh's method of playing the various Yemeni factions against each other had undermined the old system to the point where the al-Houthis could take advantage of and align enough tribes to push beyond its northern stronghold of Saada and make their way down into areas south of the capital. 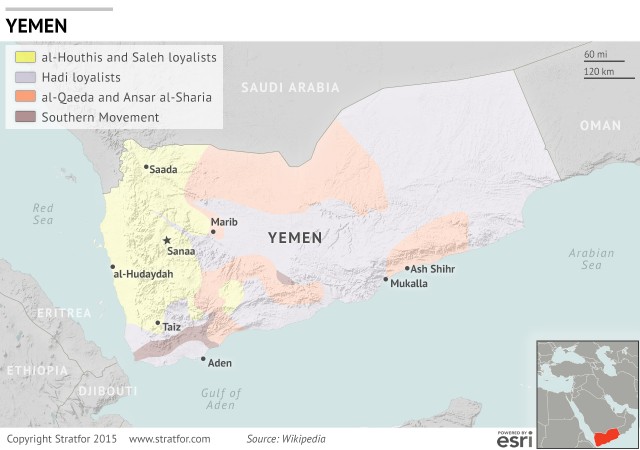 While Saudi Arabia has long meddled in Yemen and focused on combatting al Qaeda in the Arabian Peninsula, Riyadh lost sight of developments in Yemen while focusing on other regional fights. Saudi Arabia has been trying to stem chaos in the region in the aftermath of the Arab Spring, especially threats from transnational jihadist groups such as the Islamic State. It has also been occupied with supporting Bahrain's pro-Saudi Sunni monarchy as it faces a democratic uprising from its Shiite majority. It was not that Saudi Arabia was not paying attention to Yemen, but it was not expecting Iran to gain ground on its southern frontier via a movement that is not a traditional Shiite one and in fact is theologically closer to Sunni Islam.

Also, Saudi Arabia did not do enough to prevent Saleh from returning to Sanaa, where he could plot against those he felt were responsible for his fall from power and execute his own return. His plotting weakened the Yemeni government and diminished its ability to combat the al-Houthi insurgency.

Finally, it appears the al-Houthis have learned lessons from when they clashed with Saudi border guards in 2009. Now the al-Houthis are taking caution to steer clear of any direct engagement with the Saudis along the border and have instead focused inward. They are consolidating the nascent power they have accumulated and are weakening groups that might resist them. 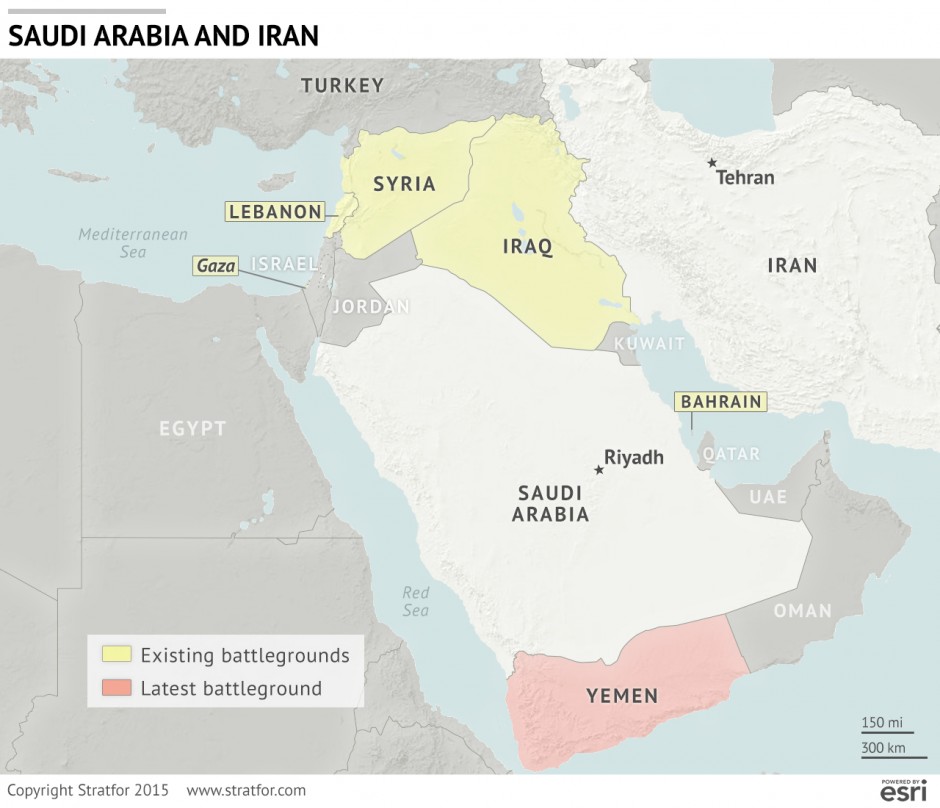 The strategy appears to have worked. The Saudis have focused on the conflicts to their north and have not reacted aggressively to the power shift that has taken place in Yemen. Now it is too late to reverse course — at least in the short term. Riyadh lacks the military capabilities to directly intervene in the country and impose order like it did in Bahrain. Also, the different political factions they used to operate through by proxy do not have the same power they once did, making any efforts less effective.

Even if it had the means to intervene, it is not entirely clear the Saudis would want to. The al-Houthis do not pose a major threat to Saudi Arabia; on the contrary, the rebels' control over north and central Yemen insulates Saudi Arabia from the chaos in other parts of the country and especially from al Qaeda in the Arabian Peninsula, which is a more immediate threat. The Saudis would rather have the al-Houthis on their southern border instead of a jihadist quasi-state that is hostile to them. While the Saudis would prefer not to have al-Houthi control of such a large piece of Yemen so close to their border, the situation seems to be the best outcome in a situation where all options are bad — as long as the al-Houthis do not start pushing northward.

Even if the al-Houthis decided to change course, Saudi Arabia would be able to defend itself. It already has a fence — though it is nothing more than a concrete-filled pipeline — with surveillance equipment in place along long stretches of the border. Nonetheless, Zaidi militiamen were able to penetrate the border in 2009, but they did not make it past the mountains. The Saudi military was able to contain them there and used airstrikes to eliminate them.

The eastern part of the border in Hadramawt is open desert with little cover to conceal an incursion force. Surveillance aircraft can spot ground vehicles from long distances, and reaching a Saudi city or even a road would require traversing hundreds of miles of desert.

The west appears to be the only place where an incursion could have success because there are mountains, roads and people there. The area also happens to be adjacent to the al-Houthi stronghold of Saada. However, the Saudi military has enough capacity to deploy forces that outnumber al-Houthi fighters. Fighting could possibly last for a while, but in the end, the al-Houthis would not be able to withstand or break through the Saudis, who have artillery and air support.

The biggest factor keeping the al-Houthis from antagonizing Saudi Arabia is their need for financial support. The country's poor financial and economic situation means the al-Houthis — or any other governing group for that matter — cannot maintain order in country without external assistance. Without long-term financial support, Yemen's water shortages could turn into a humanitarian crisis that draws in Saudi Arabia, creating the need for Sanaa and Riyadh to cooperate. The al-Houthis are aware of this, explaining why they have reached out to Riyadh to participate in indirect talks.

While it would seem logical for the al-Houthis to seek more aid from Iran, they know that Tehran is not capable of matching Saudi aid, even if the West were to lift economic sanctions. Iran can provide military, intelligence, logistical, and political support, but it has little hard cash to offer. Besides, Iran is more than 1,950 kilometers (1,200 miles) from Yemen, while Saudi Arabia is just on its northern border. Saudi Arabia can also help the al-Houthis gain international recognition as the legitimate government of Yemen.

The al-Houthis find themselves in a situation fairly similar to that of Hezbollah in Lebanon. Both groups are the biggest force in their respective countries, but they exist within political and demographic conditions that keep them from running their countries alone. Ansar Allah is trying to emulate Hezbollah in terms of getting other factions to work with it and to form a government like the confessional democracy in Lebanon.

Ansar Allah, however, is where Hezbollah was in the 1980s, and it will need time to translate its military prowess into political power. Also, the Saudis will try to prevent the group from going the route of Hezbollah. Unlike Lebanon in the 1980s, Yemen is not under Israeli occupation, and it does not have a neighbor like Syria that the Iranians can use as a conduit to nurture the al-Houthis.

Saudi Arabia knows the threat is not pressing and has decided to abstain from any formal diplomatic talks with Yemen. Riyadh also knows Tehran wants to use the al-Houthis to gain a seat at the negotiating table and become a stakeholder in Yemen, so it is being cautious. Ultimately, serious geographic and political limitations prevent Tehran from undermining Riyadh in Yemen.

Though the Saudis see the situation as ultimately favorable, they cannot become too comfortable and allow the al-Houthis to take hold in Sanaa. Riyadh must ensure that the opposition improves its position enough to sufficiently counter the al-Houthi movement. At the same time, Riyadh will need to engage Ansar Allah in talks at some point, especially while the opposition is weak from infighting — and jihadists reap benefits from the struggle.

Many of Ansar Allah's opponents — including tribes, religious Sunni elements and members of the ousted government's security establishment — are open to cooperating with jihadist forces to fight the al-Houthis. The Salafists and jihadists are the most eager to engage in a sectarian battle because they see it as a way to enhance their position. Saudi Arabia cannot allow al Qaeda or the Islamic State to emerge as the most effective forces against Ansar Allah.

In fact, the United States has already indicated that it will work with the al-Houthis to fight jihadists in Yemen, another sign of the shift in the United States' position in the Middle East. Washington sees Iran, Hezbollah and even the Syrian government — except for President Bashar al Assad — as partners in the fight against the Islamic State, a development Saudi Arabia feels threatened by.

If the al-Houthis successfully consolidate their power in Yemen, the southern Saudi provinces of Jizan and Najran will become vulnerable to al-Houthi expansion in the long run because of the significant Shiite Ismaili populations that live there. Certainly the Iranians would welcome this outcome, influencing their support for the Zaidis.

The Saudis see the al-Houthis as a possible threat from Iran. How the Saudis engage with the group and try to put distance between them and Iran will be a key factor to watch. Nonetheless, Yemen's deteriorating security situation has created another Saudi-Iranian geopolitical struggle that will last for the foreseeable future.