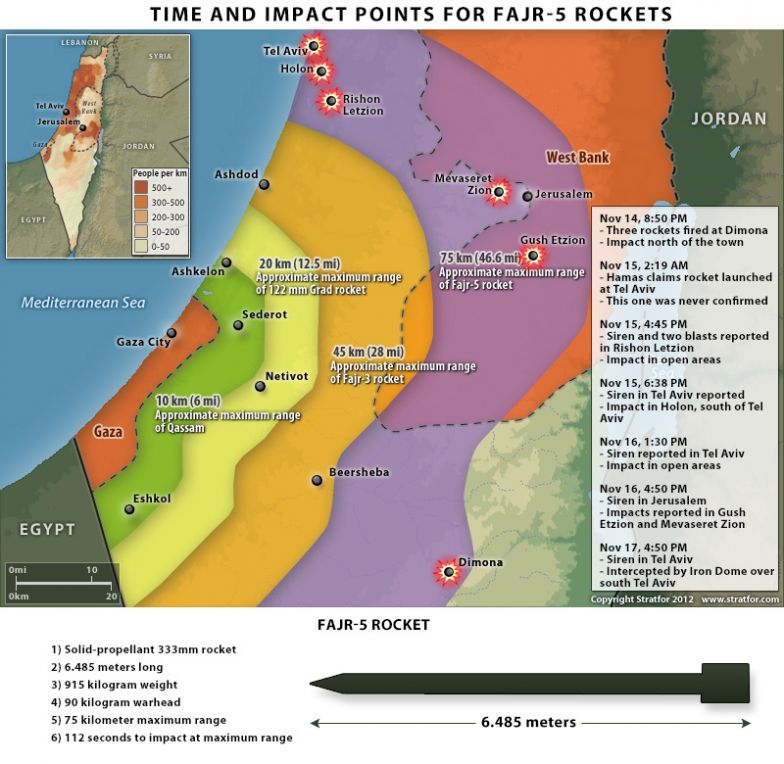 In the four days since the beginning of Israeli Operation Pillar of Defense, six confirmed Fajr-5 rockets have been launched from Gaza, all around 5 p.m. local time. The first Fajr-5 attack, during which multiple rockets were launched at Dimona, took place around 8:50 p.m. local time Nov. 13, along with a during the large volume of other rockets with smaller ranges in response to Israeli airstrikes on Gaza. Hamas may have made an impulsive decision to launch these rockets before the Israeli air force struck them or to demonstrate their longer-range capability early on in the crisis, which could explain the atypical timing when compared to the other attacks. Hamas also claimed it launched a rocket at Tel Aviv around 2 a.m. Nov. 14, but no report of a rocket coming down near Tel Aviv was confirmed. There are several possible reasons for the similar launch times. Hamas may have identified the 5 p.m. hour as the optimal time to strike, when large segments of Israeli population centers are in traffic. The group may then be pacing its Fajr-5 launches to make their stockpile last instead of wasting them at less optimal times.