A Struggle Over Russia's Interior Ministry Could Emerge

In recent weeks, rumors that Russian Interior Minister Vladimir Kolokoltsev will be replaced have been circulating among Russian media and pundits who watch Moscow. Stratfor has been monitoring the Russian government's coherence and the strength of its leader, President Vladimir Putin, as the country faces a series of crises involving its faltering economy and tensions with the West over Ukraine. Although Kolokoltsev is of little consequence as a personality, the office he holds oversees one of the most powerful tools for anyone seeking political power in Russia: a significant part of the country's internal surveillance apparatus.

Rumors that Kolokoltsev has been forced to resign first appeared Oct. 29 on Russia's Dozhd (Rain) television and were picked up by Pravda, RIA Novosti and other Russian media outlets before becoming a topic of chatter for Russian pundits. Dozhd cited sources within the Defense Ministry, though the exact status of Kolokoltsev's position was not made clear. Dozhd is one of the last independent television stations in Russia and has reported such rumors before. But even when the details of Dozhd's reporting have been off, the television station's coverage of leaks from inside the Kremlin have pointed to actual problems.

Presidential spokesman Dmitry Peskov acknowledged the rumors but did not confirm or deny them. However, this week Kolokoltsev attended the Interpol General Assembly in Monaco as Russia's interior minister. There, he acted as if his situation were normal, giving interviews on Russia's willingness to help combat various global issues such as cybercrime. After Kolokoltsev's appearance, the Russian media are now speculating that he will resign in the near future, possibly after Russia's Day of Police on Nov. 10 — a holiday celebrating the country's police, which Kolokoltsev oversees and from whose ranks he was promoted.

On a technical level, Kolokoltsev has been one of Russia's better interior ministers since taking office in 2012, understanding the operations of the police forces and interior troops. His reforms of the various forces have been viewed positively in Russia. But Kolokoltsev himself is not important, and whether he resigns will have little impact on the country. What is more important is the actual position of interior minister — and which of the Kremlin's power circles wields influence over that official.

Russia's Interior Ministry is one of the most powerful ministries in the country. As with most European interior ministries, it is responsible for internal security, overseeing local and federal police forces, paramilitary units and investigations. The ministry's paramilitary troops — which number around 200,000 — are some of the best-trained and best-equipped armed forces in Russia. They have ample combat experience, with an excellent record of service in various conflicts in the North Caucasus, most notably in Chechnya. 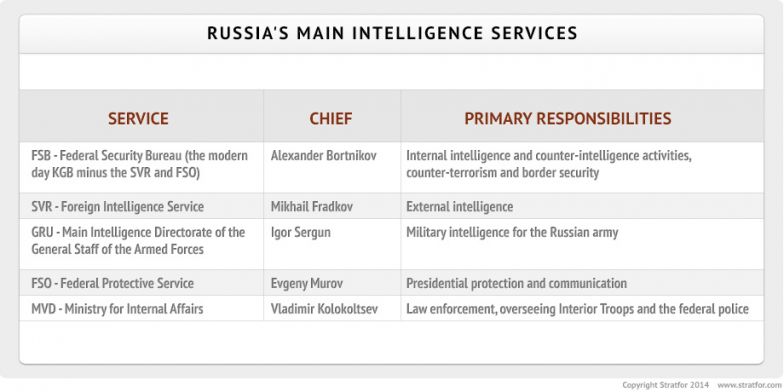 Traditionally, Russia's intelligence services have been aligned with or have overseen the Interior Ministry. During the Czarist era, the ministry controlled the gendarmes and the secret police. In the early Soviet period, Felix Dzerzhinsky — founder of the feared Cheka secret police, the precursor to the KGB — became the first Soviet interior minister and head of the secret police.

This arrangement has led the Federal Security Service, or FSB, to view the Interior Ministry's forces as its own armed wing, so it does not have to rely on the Russian military — which is overseen by competing factions — for influence. However, the FSB's control over the ministry has wavered in recent years.

Kolokoltsev's predecessor, Rashid Nurgaliyev, was in charge of internal affairs at the FSB before becoming interior minister. Thus, he ran the ministry and its forces with political motivations instead of a domestic security strategy. Kolokoltsev, on the other hand, was a police officer and later Moscow's police commissioner before stepping into the ministry. He was seen as a technocrat who was not involved in the Kremlin clans' power struggle. Because of the change in leadership, the FSB — and other security factions, such as the Investigative Committee — have been struggling with the Interior Ministry in recent years over several choice prizes, such as control over the Main Directorate of Economic Security and Anti-Corruption, which comes with more tools for investigating economic crimes. Thus, Kolokoltsev's premature withdrawal could be part of the FSB's efforts to re-exert control over the Interior Ministry.

However, the rumored choice for Kolokoltsev's replacement points to an even more important and dangerous struggle involving Putin. Leaks to the Russian media have indicated that First Deputy Interior Minister Viktor Zolotov will be chosen as Kolokoltsev's replacement. Though Zolotov is already in the Interior Ministry, he is also the former head of the Federal Protective Service, Putin's personal security detail that is the Russian version of the U.S. Secret Service. Zolotov was the personal bodyguard of Putin's mentor, Anatoly Sobchak, in St. Petersburg, where he met Putin. Zolotov is directly loyal to Putin and not part of the other security circles in the Kremlin.

Such a replacement would put a Putin loyalist directly in charge of one of the most important security forces and mechanisms in the country, keeping it out of the hands of the other various security circles, such as the FSB.

At a time when Russia is facing a series of crises that could erode Putin's popularity and leadership, this possible reshuffle has heightened importance. If more indications emerge of an impending change at the top of the Interior Ministry, they will reveal Putin's wariness over the ability of the security circles, particularly the FSB, to influence the ministry. A reshuffle will also highlight Putin's desire to shore up his direct control over some of the country's most powerful tools.