A Subtle Manipulation of Russian Elections

With Russian parliamentary elections scheduled for Sept. 18, the Kremlin is already making plans to ensure that the ruling United Russia party stays in power. Party leaders are anxious to avoid a repeat of the 2011 elections, when mass protests swept the country after the government manipulated election results. This year, instead of altering the vote after polls close, the Kremlin is looking to shape the vote before polls even open.

As Russia's economy gets worse, so does the government's standing with the public. It was able to keep a lid on the population's frustration over the past two years with the help of nationalist fervor stirred up by the crisis in Ukraine and subsequent standoff with the West, the annexation of Crimea and the military intervention in Syria. During this time, criticizing Russian President Vladimir Putin, the ruling party, or the Kremlin was considered unpatriotic.

But the wave of nationalism can carry the government only so far. Since the start of the year, Putin's approval rating has slipped by 10 percentage points, according to independent pollster Levada Center. Support for the United Russia party has fallen by 15 points to 45 percent, party sources told the newspaper Nezavisimaya Gazeta. Moreover, the Federal Security Service has reportedly been deployed to measure regional sentiment going into the elections.

The Kremlin cannot blatantly engineer the upcoming elections as it has in the past. The Russian people have mostly overlooked electoral fraud, but only when the country was prosperous. When the Kremlin tried manipulating the 2011 parliamentary elections — stuffing the ballot box, banning rival political parties, and misusing the media and funding — nationwide protests ensued and disrupted the country for months. They shook the Kremlin to its core, moving Putin to make several concessions, including reshaping electoral policy.

This year, the Kremlin has two goals for parliamentary elections: control the results and avoid protests. Beyond that, the elections are a test of the tactics to keep United Russia in power and of Russian public sentiment going into the 2018 presidential elections, in which Putin could run for a fourth term.

New Face of the Elections

The Kremlin moved the upcoming parliamentary elections up from December to September in anticipation of United Russia's popularity falling further and to hamper opposition parties' efforts to organize more competitive campaigns. Bumping up elections to just weeks after summer holidays will also weaken voter turnout. In addition, the government will ensure that employees of the state, who are urged to vote by their employers, turn out. That plan worked in 2015 regional elections; voter turnout was low, and those who did show up to the polls voted largely in favor of United Russia. Moving up the 2016 elections has sparked backlash across the political spectrum, though, drawing criticism from the Communist Party and the liberal opposition parties. But accelerating the election timetable is just one Kremlin tactic being used to predetermine the elections' outcome.

On March 3, the Kremlin announced the names of the members of the Central Election Commission. The commission's longtime chief, Vladimir Churov, was missing from the list. Churov, a Putin loyalist, had headed the commission since 2007, another occasion when the Kremlin used widespread electoral fraud. In fact, one of the demonstrators' key demands — which went ignored — in the 2011 protests was that Churov resign.

Going into these elections, however, the Kremlin is putting a new face on the commission. Churov was replaced by human rights advocate Ella Pamfilova, who has fought the Kremlin on numerous occasions, including defending journalists from oppressive Kremlin policies. Though she has not toed the Kremlin line in the past, her appointment was intended more to appease frustrated voters going into the election than to institute actual reform.

Putin's government has also looked to another often-used approach to mold elections: legislation. First, Moscow has changed the electoral thresholds needed to get into the State Duma. Half of the body's 450 seats will now be elected individually through direct popular vote. The other half will be elected through proportional representation from lists of parties passing the 5 percent support threshold, the voting method used in the 2011 election. Having single seats directly elected by voters hints at political liberalization, but in past elections (such as 2003) that approach has benefited United Russia. Well-known independent local politicians can use their name recognition to win, then be swayed to join the ruling party.

Second, the Kremlin lifted restrictions on the registration of political parties. The number of registered parties has soared from seven in the 2011 parliamentary election to 78 today. Again, at face value, the change appears to promote political pluralism, but in fact the field is now muddied with an excessive number of small, nominal parties that steal votes from one another. Furthermore, the Kremlin is not allowing these parties to merge into formal coalitions and consolidate their support.

Third, the Kremlin will likely restrict the regions where certain parties can run. Liberal opposition groups have been limited from running in more liberal regions, though they are allowed to run in Kostroma, a conservative region of small villages. Also, the far-right Rodina party is prohibited from running in conservative regions, where it can take votes from United Russia.

Finally, the electoral commission decided to reduce the number of observers for the upcoming election and limit their ability to coordinate among polling stations. Media monitoring of the elections will be similarly confined, with only accredited outlets and reporters allowed to cover the polls.

Liberal and fringe parties will be largely contained through these efforts, but mainstream parties are the main threat to United Russia. Four parties — United Russia (53 percent), the Communist Party (20 percent), Just Russia (14 percent) and the Liberal Democrats (12 percent) — sit in the State Duma. In the 2011 elections, United Russia lost 77 seats to the other three parties, leaving it with 238 seats and a slight majority. 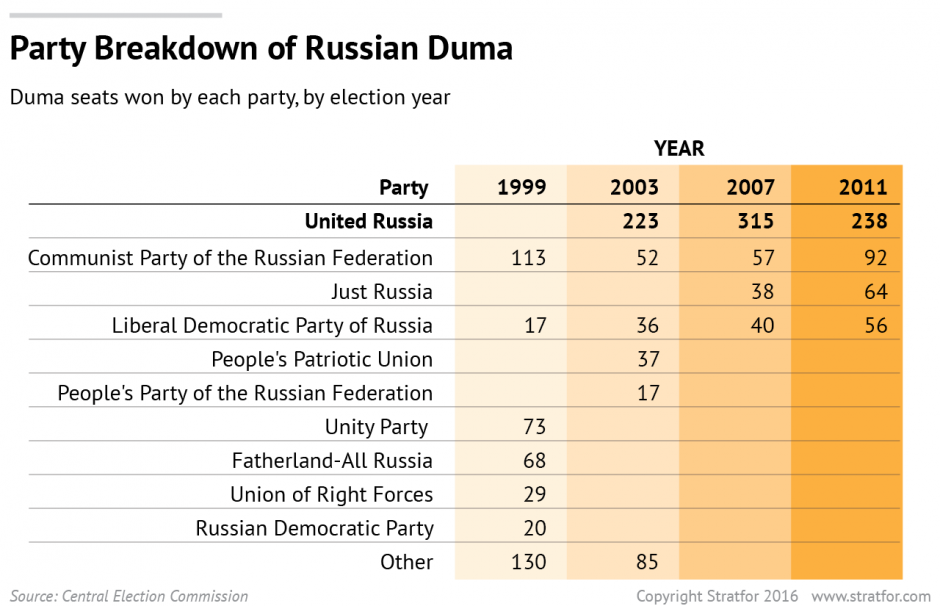 The Kremlin will have relatively stiff competition from the mainstream parties this year as well. The ailing economy has revived pockets of popularity for the Communist Party, and national security concerns have slightly boosted the far-right Liberal Democratic Party. In one of Putin's concessions to protesters four years ago, direct elections of governors and officials in select municipalities were restored. This enabled the Communist Party to pick up the mayoralty of Novosibirsk in April 2014 and the governorship of Irkutsk in September 2015, the first defeats of United Russia incumbents since the policy change.

Since then, the Kremlin has tinkered with the direct election policy by practicing ways to siphon off votes from opponents. Primarily, it has allowed fringe parties, such as Patriots of Russia and Yabloko, to run without having to gather signatures to meet the electoral threshold. Patriots of Russia was able to take votes from the Communist Party in the 2015 regional elections, while allowing Yabloko in the race pacified those who would vote for restricted liberal opposition groups.

Yet it seems the four mainstream parties may have worked out a backroom deal for the upcoming elections. According to leaks in Russian media, the parties agreed not to compete with each other in 40 of the single-seat elections. Instead, the four parties will divide those districts among themselves — 10 seats apiece. With this deal, the Kremlin is likely ensuring United Russia keeps its majority, while promising more minor positions to the mainstream opposition.

Together, these tactics seemed to work for the most part in 2015, but parliamentary elections garner much more attention than regional balloting does. In addition, Russia's economic and political situation is going to get only more hectic this year. It looks as if the Kremlin can contain the electoral backlash through subtlety, for now. But while the election may already look decided, the test will be whether Putin can withstand public scrutiny as he runs for another term in 2018.