Syria: A Chronology of How the Civil War May End

An explosion rocks the Syrian city of Kobani during a reported suicide car bomb attack by Islamic State militants on a People's Protection Unit (YPG) position, as seen from the outskirts of Suruc, on the Turkey-Syria border, October 2014.

Editor's Note: The conflict in Syria is entering a critical phase. Turkey has at long last entered the fight, conducting airstrikes against Islamic State targets in Syria — and capitalizing on the opportunity to attack Kurdistan Workers' Party militants in northern Iraq. Turkey's newfound vigor is fueled by a convergence of U.S. and Turkish interests in the region, evidenced by the July 23 agreement between Ankara and Washington to allow U.S. forces to use Incirlik Air Base. There is a shared interest in combating the Islamic State, and both countries want to see a diplomatic resolution to the Syrian conflict that would end the fighting and remove Syrian President Bashar al Assad from power. Al Assad's frank July 26 comments about the level of fatigue in the Syrian army, combined with the continued success of Syrian rebel groups and the prospect of Turkey's increased participation, could indicate that the al Assad regime itself is considering its options.

U.S. Secretary of State John Kerry will to travel to Doha on Aug. 3, where he will discuss the future of Syria with Russian Foreign Minister Sergei Lavrov. Stratfor has been tracking the evolution and perspectives of the key parties involved in the Syrian conflict from the opening of hostilities. We are publishing this chronology to highlight our previous analyses and forecasts.

July 8, 2015: With government forces on the defensive on multiple fronts, Syria will be a focal point for regional competition going into the quarter. Iranian and Russian economic and military sponsorship of Syrian President Bashar al Assad's government will endure, but the government is still unlikely to go on the offensive as long as it is stretched thin and lacking momentum. That said, a break point on the Syrian battlefield will not occur this quarter. Loyalist forces will be able to retain a weakening presence in the north in Aleppo while holding down a critical corridor running from Damascus up through Homs to the coast. Rebel forces will seriously threaten approaches to the government forces' core, particularly around Hama and from the south in Daraa.

Talk of a political arrangement after al Assad will gain momentum as the battle progresses. Russia and the United States appear to be working to identify ranking Alawite officers who would be part of such an arrangement — and critical to maintaining the institutions of the state — as well as rebel factions that would be willing to come to the negotiating table with al Assad's removal as a precondition. As we noted last quarter, Russia will play a big role in the negotiating effort, not only to try to maintain its influence in the Levant but also to build up a U.S. dependence on Moscow in the Middle East that Russia can use as leverage in its standoff with the West.

June 12, 2015: Within the first year of the Syrian rebellion, a number of intelligence agencies and media outlets said the government of Syrian President Bashar al Assad had only months to live. Stratfor saw it differently. The battle was proceeding at a rapid pace, and things definitely looked dicey for the government at times, but we knew this would be a protracted fight. For one thing, the Alawites, while a naturally fractious lot, were facing an existential crisis against a Sunni majority and were not going to crumble easily. For another, the divisions within the rebel landscape (and among the rebels' foreign sponsors) were so great that both sides lacked the means to overwhelm and defeat the other. Many of those constraints still apply, but things are now moving in a direction that admittedly has us on the edge in contemplating a scenario after al Assad.

Russia's Search for Leverage in the Syrian Crisis

Dec. 12. 2012: Russia and the United States are engaged in seemingly urgent negotiations over Syria. The Syrian chemical weapons threat that the United States has been publicly emphasizing may provide an opportunity for Russia to regain leverage in Syria after the fall of Syrian President Bashar al Assad's regime.

U.S. Secretary of State Hillary Clinton and Russian Foreign Minister Sergei Lavrov held an impromptu 40-minute meeting Dec. 6 hosted by U.N.-Arab League Special Envoy Lakhdar Brahimi on the sidelines of a European security meeting in Dublin. Earlier in the day, Clinton and Lavrov spoke privately for about 25 minutes. The focus of the meetings was reportedly recent chemical weapons activity in Syria. Few details on the outcome of the meetings have surfaced, but both sides have given the impression that talks are moving forward to try to ensure a stable transition to a post-al Assad Syria. 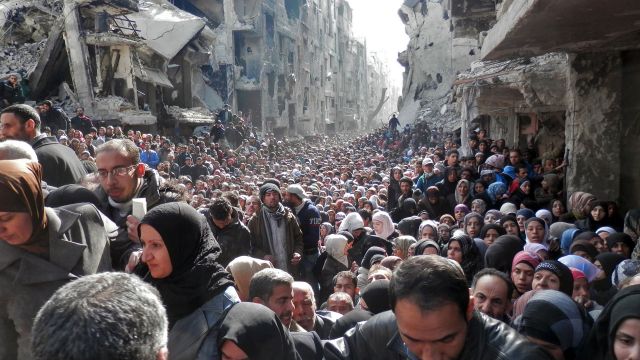 In this handout provided by the United Nation Relief and Works Agency (UNRWA) in January 2014, residents wait in line to receive food aid distributed in the Yarmouk refugee camp in Damascus, Syria.

Turkey's Challenge and the Syrian Negotiation

Oct. 16, 2012: Syrian Information Minister Omran al-Zubi harshly criticized the Turkish government early last week over Ankara's proposal that an interim government succeed the al Assad regime, saying that "Turkey isn't the Ottoman Sultanate; the Turkish Foreign Ministry doesn't name custodians in Damascus, Mecca, Cairo and Jerusalem." Being the spokesman for a pariah regime requires a mastery of propaganda. Al-Zubi has not disappointed in this regard, mounting a strong rhetorical offensive against Syria's powerful northern neighbor.

While his latest rebuke of Turkey will not save the al Assad regime (much less his own career), he is tapping into a powerful narrative in the region, one that will have stronger and stronger resonance in the Arab world as Turkey is forced to play a more assertive role in the region.

Considering a Palace Coup in Syria

Aug. 7, 2012: Syrian President Bashar al Assad's regime has maintained its hold on power amid escalating violence and international criticism over the past year. However, pressure on the regime could eventually increase to a point that other members of the inner circle may attempt to supplant the al Assad clan. This small group of elites could even receive backing from Syria's allies, Russia and Iran. While such a coup scenario appears unlikely at present, the threats the al Assad clan faces from within the regime are at least as serious as the threats from external powers or the opposition.

Russia Changes Its Position on Syria

July 20, 2012: Russian Ambassador to France Alexander Orlov said July 20 that Syrian President Bashar al Assad is ready to step down, noting that it would be difficult for the president to stay in power after all that has happened in his country. Stratfor has expected Russia to change its stance on Syria as the country's situation approaches its endgame. Moscow has now become the driver in the international diplomacy surrounding Syria, and with the regime falling apart Russia is now repositioning itself to manage the transition process. Indeed, by offering up the idea of al Assad stepping down, Russia is letting France and the rest of the West know that it is ready to work on formulating a transition.

A longtime ally of Syria, Russia is ideally suited to help manage the transition. Russia has more intelligence and security links in Syria than any other state, including Iran, and it could use those links to shape post-al Assad Syria. The United States and Europe are fearful of a complete regime collapse and do not want to see what happened in Iraq and Libya happen in Syria. Aware of that anxiety, Moscow is offering an alternative in an attempt to make itself indispensible to the West.

June 29, 2012: Turkey deployed anti-aircraft guns June 27 along the border with Syria in response to Syria's June 22 downing of a Turkish reconnaissance plane. Largely intended to compensate for what is perceived as a non-response, the deployment came after Turkish Prime Minister Recep Tayyip Erdogan visited Brussels in an attempt to convince the United States and Europe that the Syria conflict was a multilateral problem that also concerned them. In return, he received little more than a stern statement condemning Syria.

Given the complexities and constraints that Turkey must confront in dealing with the Syria crisis, the Turkish response made sense — but it came at the cost of making the Syrian regime look relatively strong. It also showed the disunity of the covert supporters of the Syrian rebels — the United States, Turkey, Saudi Arabia, Qatar and others. The support of these countries will continue to fuel the insurgency and give the Syrian rebels hope that the regime will eventually fracture, creating an opportunity for them to take over. However, without a foreign military intervention, it will take more than a protracted rebellion to bring down the al Assad regime.

Making Sense of the Syrian Crisis

May 5, 2011: Syria is clearly in a state of internal crisis. Protests organized on Facebook were quickly stamped out in early February, but by mid-March, a faceless opposition had emerged from the flashpoint city of Daraa in Syria’s largely conservative Sunni southwest. From Daraa, demonstrations spread to the Kurdish northeast, the coastal Latakia area, urban Sunni strongholds in Hama and Homs, and to Aleppo and the suburbs of Damascus. Feeling overwhelmed, the regime experimented with rhetoric on reforms while relying on much more familiar iron-fist methods in cracking down, arresting hundreds of men, cutting off water and electricity to the most rebellious areas, and making clear to the population that, with or without emergency rule in place, the price for dissent does not exclude death. A survey of the headlines would lead many to believe that Syrian President Bashar al Assad will soon be joining Tunisia’s Zine El Abidine Ben Ali and Egypt’s Hosni Mubarak in a line of deposed Arab despots. The situation in Syria is serious, but in our view, the crisis has not yet risen to a level that would warrant a forecast that the al Assad regime will fall.