Understanding What Went Wrong in Benghazi

A Libyan man walks through the debris of the damaged US ambassador's residence in the US consulate compound in Benghazi on September 13, 2012, following an attack on the building late on September 11 in which the US ambassador to Libya and three other US nationals were killed. Libya said it has made arrests and opened a probe into the attack, amid speculation that Al-Qaeda rather than a frenzied mob was to blame.

The following analysis was originally published three days after the Sept. 11, 2012, attack on the U.S. Consulate in Benghazi, Libya. The first detailed account of this attack, written by terrorism experts Fred Burton and Samuel M. Katz, is now available.

In light of the deadly Sept. 11 attack on the U.S. Consulate in Benghazi, myriad questions have emerged about the security failures that led to the deaths of U.S. Ambassador Christopher Stevens, three other U.S. citizens in Benghazi and eight Libyan security guards. Indeed, multiple factors, some stemming from the consulate's hasty establishment after the Libyan civil war erupted in 2011, made the diplomatic compound uniquely vulnerable to an attack. The security risks were increased by the highly charged environment and recent resurgence of jihadist activity in Benghazi, as well as the questionable decision for the ambassador to be in such a location on the anniversary of the 9/11 attacks.

The first factor to examine when analyzing the chain of events that led to the Benghazi attack is the environment in which the facility was located. There has been a long history of jihadist sentiment and activity in eastern Libya, especially in Benghazi and the longtime militant stronghold of Darnah. Former Libyan leader Moammar Gadhafi's regime actively suppressed Islamist militants in the region.

As Stratfor discussed one month before the NATO intervention began in Libya in March 2011, concerns emerged that a collapse of the regime would provide the jihadists with opportunities to regroup and strengthen.

This resurgence became apparent in May 2012, when jihadists attacked the offices of the International Red Cross in Benghazi, and again in June, when militants attacked the U.S. Consulate in Benghazi with an improvised explosive device and attacked the motorcade of the British ambassador with rocket-propelled grenades. 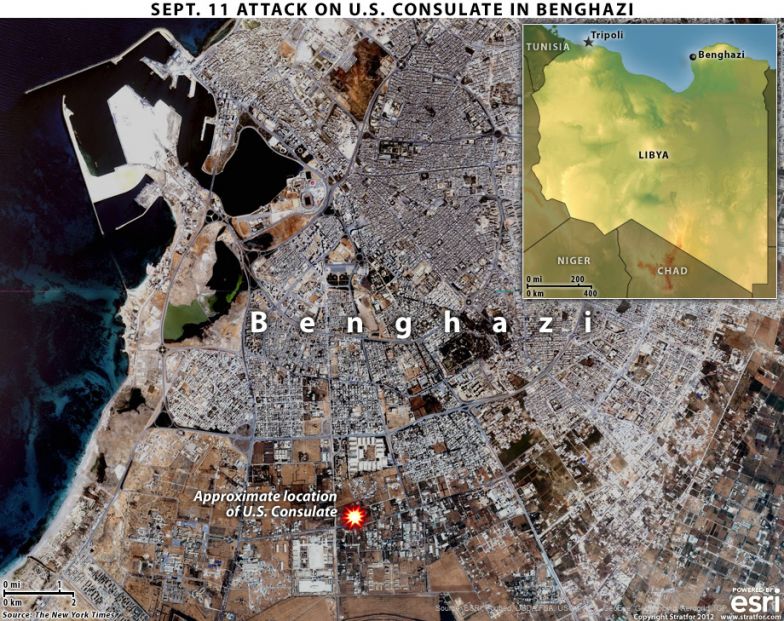 Under the Vienna Convention on Diplomatic Relations, responsibility for the security of diplomatic compounds rests with host countries, but the U.S. government has learned through other security incidents that many countries cannot be depended upon to provide adequate protections. This is especially true in a city like Benghazi, where the central government in Tripoli has very little authority over the heavily armed local militias.

Unlike typical consulates and embassies, the consulate building in Benghazi was not constructed to U.S. Department of State security standards. It was a villa that was being rented until a more suitable facility could be constructed. There was no U.S. diplomatic presence in Benghazi prior to the Libyan revolution, and the U.S. presence in the city was established hastily while the fighting with the regime was still under way. The villa was constructed to standards typical of local residential structures. Unlike modern U.S. diplomatic compounds, it was not constructed to withstand explosive devices and rocket attacks.

U.S. diplomatic facilities that meet current security standards have heavy perimeter walls built with significant stand-off distance from the road, as well as specially reinforced walls and windows. In addition, the compounds are built with intentional, concentric layers of security features, including safe-rooms in each compound's core, that would have provided additional protection in the Benghazi attack. Since the near tragedy at the U.S. Embassy in Islamabad in 1979, when the facility was sacked and burned, the safe-rooms now feature escape hatches for cases when a fire traps occupants in the room.

The makeshift consulate in Benghazi housed very few U.S. employees and very little classified information, so there was less of an evident need for a detachment of U.S. Marine Security Guards than, for example, at the U.S. Embassy in Cairo (there is not even a MSG detachment at the U.S. Embassy in Tripoli due to host country sentiments). MSGs at an embassy or a consulate are charged with protecting the interior of the facility, including U.S. personnel and classified material. Working under the direction of the Regional Security Officer, a special agent with the U.S. Diplomatic Security Service, the MSGs will normally begin their defense at the interior "hardline," an interior layer of robust physical security measures, though at times they will take to an embassy roof to fire tear gas or to help defend the facility. The ambassador's presence at the consulate in Benghazi was an anomaly. He would normally work from his office in the embassy in Tripoli.

The U.S. government accountability review board that will be established to investigate the Benghazi attack will undoubtedly examine the decision to take Stevens into a city with a demonstrable jihadist threat on the anniversary of 9/11. The ambassador did have a protective security detail consisting of Diplomatic Security Service agents and local security officers with him at the time of the attack, but the assailants were armed with heavy machine guns and rocket-propelled grenades. The detail quickly became outgunned and trapped in a facility with poor physical security.

The U.S. bureaucracy for building new projects works very slowly. It requires funding from Congress as well as planning by the State Department's Office of Overseas Building Operations. It is almost certain that the U.S. Embassy in Tripoli had requested a new facility in Benghazi, but such a project would take years to plan and build. As Stratfor has previously discussed, funding has also become an issue because securing the huge diplomatic presence in Iraq is consuming a substantial percentage of the state department's security budget. This, combined with other budget concerns, has moved the United States into the "bust phase" of the boom/bust diplomatic security spending cycle, which has made it even more difficult to get funding for small, remote posts such as Benghazi — although the tragedy there might once again get that pendulum swinging in the other direction.

The Fate of Israeli-Arab Normalization Under Biden

For U.S. Rivals, the Capitol Siege Offers a Window of Opportunity