United States: The Problem of Aging Infrastructure on Inland Waterways

Cargo ships pass along the Mississippi River on April 13, 2011, in New Orleans.

The United States continues to face the problem of aging infrastructure on major water-based transport routes. A new waterways bill that is likely to be finalized soon — the first such legislation since 2007 — addresses some of the inefficiencies in the current system. However, the larger looming problem of insufficient funding remains. The U.S. inland waterways infrastructure is old, much-needed improvements have been delayed and the total cost of rehabilitation is expected to rise.

This is not a new or unknown problem, but measures to address the problem have been limited, and there is no immediate, rapid solution. Navigable rivers are one of the United States' inherent geographic benefits and have contributed to the nation's economic success. Failure to update and maintain the inland waterways could lead to disruptions in the supply chain and hurt U.S. competitiveness on the global export market.

The United States' inland waterways system — more than 19,000 kilometers (12,000 miles) of navigable routes maintained by the U.S. Army Corps of Engineers overlaid with expansive farmlands — has contributed greatly to the country's success. Ongoing use of the waterway system requires the maintenance of infrastructure to meet usage demand, including dredging of ports and rivers, and the operation and maintenance of dams, levees and locks. 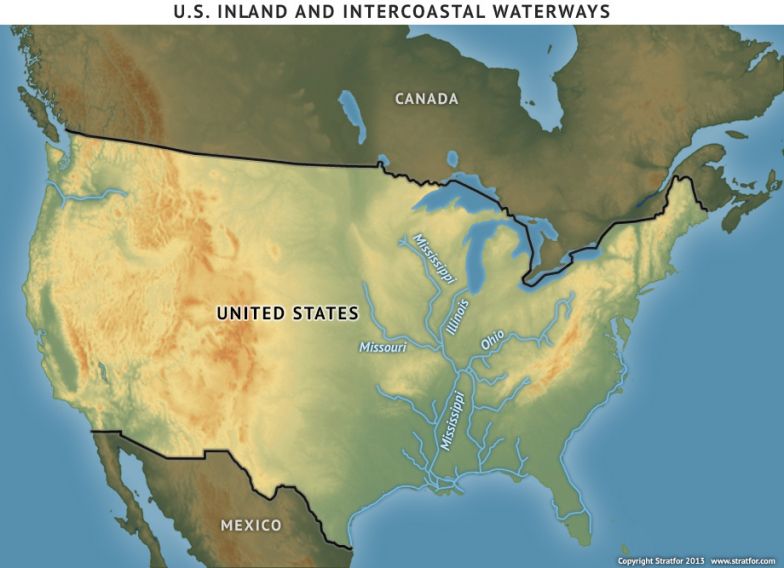 The Mississippi and Ohio rivers and the Illinois waterways, the busiest avenues for commercial traffic on inland waterways, all have expansive lock systems. The locks make navigating a river easier, sequestering vessels before raising or lowering the water level in a chamber in order to compensate for changes in the river's level. Most of these locks were constructed in the early 20th century, with an expected lifetime of 50 years. Seventy or 80 years later, many of these locks are still in operation. Unplanned delays due to mechanical breakdowns have been on the rise for more than a decade.

Funding for Inland Waterways and Ports

Under the current policy, the cost of maintaining this infrastructure falls to the federal government, but funding for major construction and rehabilitation projects on inland waterways is split equally between federally appropriated funds and money from a trust, the Inland Waterways Trust Fund, which currently secures revenue through a 20 cent tax on commercial barge operators' fuel. The tax rate has remained the same since the mid-1990s. The fund's assets began declining in 2002 and fell rapidly starting in 2005 as expenses continued to increase as the system aged, eventually exceeding the revenue generated by the fund. Moreover, some projects exceeded their expected budgets, further straining the trust fund. The decline of the Inland Waterways Trust Fund was halted in 2010 after the federal government suspended new contracts using money from the fund.

Port and harbor maintenance has a similar trust fund, the Harbor Maintenance Trust Fund, which receives money from a tax on imports and domestically traded goods. Unlike the fund for inland waterways, the Harbor Maintenance Trust Fund has a surplus. The funds are used for port maintenance, such as dredging to maintain port depths, and not for new construction, so many larger ships must still wait until high tide as full channel depths are not maintained at all times — even in some of the nation's busiest ports. As vessels, especially container ships, become larger, an inability to maintain port depth could result in additional delays and an increase in related costs. With the expansion of the Panama Canal, many Gulf and East Coast ports want to expand to handle the larger vessels that will now be coming through the canal. Increased use of the Harbor Maintenance Trust Fund (the government's budget for 2013 requested $848 million for maintenance programs — roughly 50 percent of the revenues the fund generated in 2013) could allow ports to conduct more maintenance dredging to prevent unnecessary delays.

However, competition between ports could make the distribution of funds contentious. Because the trust fund is supplied from taxes on traded goods, ports that have higher traffic contribute more to the fund, but these ports are often not the ones that require the most dredging maintenance. For instance, Los Angeles/Long Beach spends less than 1 cent from the Harbor Maintenance Trust Fund per ton of cargo moved, whereas Savannah, Ga., spends 42 cents per ton, and Grays Harbor, Wash., spends $6.16 per ton. The system is set up for a cooperative environment, but as more ports compete for the projected increases in traffic coming through the Panama Canal after 2015, this cooperative system has the potential to break down.

The U.S. government traditionally passes water resource legislation every two years, but the Water Resources Reform and Development Act, which the House of Representatives passed resoundingly with strong bipartisan support Oct. 23, was the first such legislation passed since 2007. The Senate passed a similar bill in May. The House and Senate versions will have to be reconciled, but both versions passed with bipartisan approval and are fairly similar, so it is reasonable to believe that some version will become law. 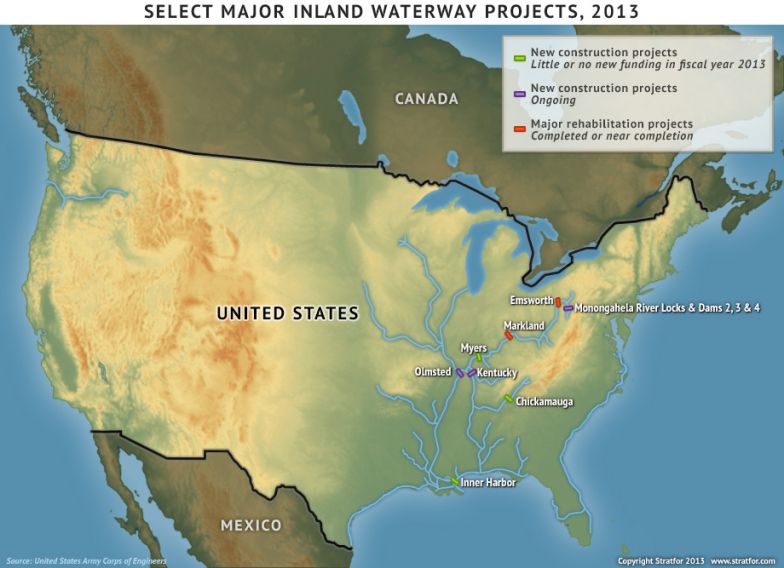 Part of the legislation is meant to limit projects that are unnecessary or stalled, freeing up funds for more necessary projects. A total of $8 billion in projects, including flood prevention and port expansion projects, would be approved under the new House bill, while $12 billion in projects would be eliminated. In addition, time limits on feasibility and environmental studies will be imposed. For the past several years, a large portion of the Inland Waterways Trust Fund has been tied up in a single lock improvement project, commonly known as the Olmsted project. Both versions of the bill increase federal funds for the project, freeing up money from the trust fund for other projects. Congress will consider the use of alternative methods to provide more revenue for the Inland Waterways Trust Fund, but no specific changes are outlined. Both versions of the bill also attempt to address the Harbor Maintenance Trust Fund's current spending practices and increase total spending from the trust over the course of the next several years.

Regardless of the new legislation, the problem of underfunded and outdated infrastructure remains. The U.S. Army Corps of Engineers estimates that it will cost $125 billion or more to revamp the entire inland waterway system. Some estimates show that just maintaining the status quo of unscheduled delays for the more than 200 locks on U.S. inland waterways would require an investment of roughly $13 billion dollars by 2020, averaging out to more than $1.5 billion annually. Operating and maintaining these are only part of the responsibilities held by the U.S. Army Corps of Engineers, which has a total appropriated non-emergency budget of roughly $5-6 billion annually. Because spending from the Inland Waterways Trust Fund is limited, a total of $170 million per year is currently available for major inland waterway construction projects. If operating under unconstrained conditions, the recommended construction budget for major rehabilitation or new construction would average $900 million per year over the next 20 years, with some years reaching $1.5 billion. Under the current budget, upgrading the system will be a long, drawn out process, and unintended delays are likely to continue increasing in the near term.

The drought in 2012 brought to the forefront how unplanned delays, or even the potential for unplanned delays, can affect both transport operators and commodity prices. Transportation by barge is well suited for bulk commodities that can benefit from the cost savings by exploiting economies of scale. The agricultural, coal, petroleum and fertilizer industries rely heavily on U.S. rivers to transport goods. Each year, more than 600 million metric tons of cargo, valued at roughly $180 billion, is handled along inland waterways managed by the U.S. Army Corps of Engineers.

In addition, it is hard for older infrastructure to accommodate modern barges. This often causes longer passage times, which could contribute to increased transportation costs for goods. According to the American Society of Civil Engineers, costs attributed to delays reached $33 billion in 2010 and are projected to rise to $49 billion by 2020. Road and rail provide alternative transportation modes, and the current increase in road and rail freight traffic is projected to continue. Since a single 15 barge tow is equivalent to roughly 1,000 trucks or more than 200 rail cars, shifting traffic from rivers to road or rail likely will increase congestion on these transportation routes. Moreover, waterways remain the least expensive mode of long-distance transport for freight, with operating costs of roughly 2 cents per ton per mile compared to under 4 cents per ton per mile for rail and slightly less than 18 cents per ton per mile for truck. This increased cost likely will be passed on to the consumer, and since a significant portion of the freight traveling on waterways is destined for export, this could affect global commodity prices, especially for staple agriculture products like corn and soybeans.

Increases in federal spending could make up the difference between the funds needed and the funds available. However, as U.S. government funding for infrastructure spending has dropped significantly in recent years, increases in user fees, tolls or private funding likely will be needed to fully pay for all current and future necessary improvements to the U.S. inland waterways. Until then, limited improvements to the aging infrastructure will likely continue to cause transport delays. Given the importance of waterways as a transport method for bulk goods, including agricultural exports, delays and the accompanying transport cost increases could affect both the U.S. economy and global food prices.