U.S. President Barack Obama attends a meeting during a 2015 Association of Southeast Asian Nations (ASEAN) Summit, similar to the one taking place in Sunnylands, Calif., on Feb. 15-16.

Editor’s Note: More than four years since U.S. President Barack Obama's administration announced its "pivot to Asia" — a strategic rebalancing effort centered in large part on increased engagement with Southeast Asia — the White House is looking to breathe new life into the initiative. On Feb. 15-16, Obama is hosting regional leaders from the 10-member Association of Southeast Asian Nations (ASEAN) at a special summit at Sunnylands, Calif. — the first-ever standalone meeting with the bloc on U.S. soil.

Southeast Asia is a region defined by the divide between the integrated mainland portion on the peninsula and the network of archipelagos stretching from Indonesia to the Philippines. ASEAN loosely ties these disparate nations together into a single regional bloc. But differences in economic and strategic imperatives among its members historically have undermined the bloc's unity and limited its power, preventing greater cooperation with outside powers, including the United States. Nonetheless, the Sunnylands gathering illustrates the importance Washington still attaches to the region.

The U.S.-ASEAN summit comes amid rising tension regarding China's push into the South China Sea, a dispute where the United States and several ASEAN member states share an interest. It also comes on the heels of the passing of the Trans-Pacific Partnership and the launch of the ASEAN Economic Community, both of which Washington hopes will further unlock Southeast Asian trade and limit Chinese economic sway in the region.

To mark the occasion, Stratfor is publishing this chronology of analyses examining Washington's goals in the region, its evolving engagement with ASEAN states, and the broader issues likely shaping discussions at the summit.

The Limits of Soft Power in the South China Sea 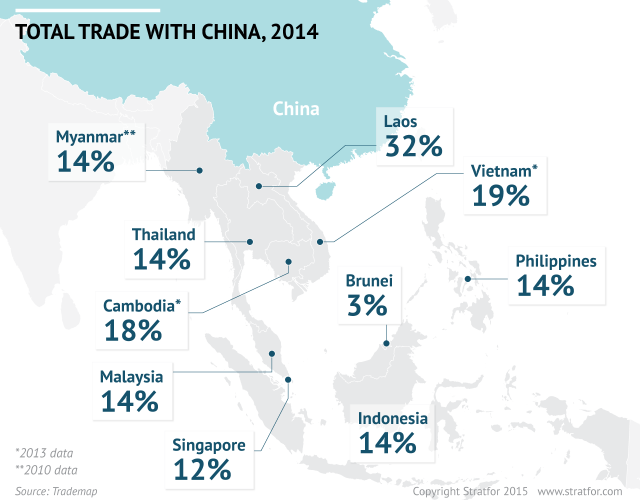 Nov. 18, 2015: To prevent ASEAN states from banding together in response — or from embracing outside powers too heartily — China deploys a divide-and-conquer strategy to disrupt cohesion and atomize resistance. In practice, this often involves leveraging its economic heft and strategic investment capacity to keep Southeast Asia divided between claimant and non-claimant states, as well as exploiting the internal divides of claimant states. Beijing also eschews multilateral negotiations and seeks to undermine U.S. dominance in established trade blocs while touting the benefits of a China-led order through its own initiatives. Beijing hopes the incentives it offers, along with the widening gulf between its force projection capabilities and those of even the most powerful Southeast Asian militaries, will compel regional states to accept Chinese regional dominance as inevitable.

Most members are wary of China's island building. Yet, the 10-member bloc has long struggled to speak cohesively on the issue at its semiannual gatherings, much less to organize any sort of mechanism for punishing Chinese assertiveness. At the last ASEAN summit in May, the bloc issued its strongest statement of disapproval to date — with a milquetoast message that did not mention China by name (though it provoked a hearty denunciation from Beijing anyway). Three weeks ago, a summit of ASEAN defense ministers concluded without any joint statement at all.

Oct. 26, 2015: China feels it can manage the opposition from various members of the Association of Southeast Asian Nations (ASEAN) by both manipulating ASEAN as a whole and by leveraging economic and military influence. Beijing also believes it can manage Washington, betting that the United States will work to avoid any real conflict with China in the South China Sea. This has been the case so far. Although Washington has challenged Beijing’s take on what is and is not allowed in the waters of the South China Sea. And whether China has a legitimate claim to the seas there, it has been careful to avoid any action that could lead to physical confrontation. China is well aware of U.S. reluctance to escalate the conflict and takes advantage of it to keep expanding its presence.

With TPP, the Devil Is in the Details

Oct. 6, 2015: The TPP — alongside the U.S. engagement with the Association of Southeast Asian Nations, the political rehabilitation of Myanmar, the encouragement of Japanese "normalization" and expanding security cooperation with Vietnam and the Philippines — is part of the same response to shifting international patterns. The TPP may not be specifically about squeezing China out of its increasingly substantial economic role in the Asia-Pacific, but it is certainly in recognition of the rising significance of the region, and the challenges confronting an emerging power on the regional and global stage. China is a major power emerging a century late, long after it is fashionable to be seen as rising, expansionary or even imperialistic. The perception and responses are in part shaped by 19th and 20th century ideas of emerging powers, zero-sum games and global balances. But they are equally shaped by the new realities of integrated global markets, the heavy economic interactions and interdependencies between erstwhile competitors, and the evolving definitions and applications of "power" on a regional and global scale.

Nov. 10, 2014: Beijing's view is not just historical or symbolic, but driven by the reality of China's geopolitical position now and in the future. China's economic and political stability is increasingly dependent on the country's ability to import and export through seas controlled primarily by the United States. Naturally, China's regional vision — and the myriad trade and investment deals Beijing hopes will cement that vision — reflects Beijing's need to limit its seaborne vulnerabilities by expanding land-based trade and energy ties throughout Eurasia. To realize its long-term goals of regional economic and political leadership, China must ensure its basic security by building in supply chain redundancies — in this case, redundancies that offer the added benefit of expeditiously linking Chinese inland producers with overland trade partners.

July 24, 2014: Southeast Asia is changing, even reactively. The countries are becoming more aware of their regional security challenges, and they are acutely aware of the rising competition as China seeks to alter the regional security status quo and Japan begins to emerge from its decades of passivity. The post-colonial legacy of Southeast Asia is giving way to a renewed competition among the larger regional powers, but fractures in Southeast Asia — both within the individual countries and as a group — leave the region vulnerable.

May 3, 2013: Recent financial inflows in Southeast Asia have caused upward pressures on regional currencies and heightened risks of asset bubbles. With memories of the 1997 Asian financial crisis fresh in mind, this surge of investment prompted ASEAN to create an institution to mitigate the accompanying risk. This institution was ASEAN+3, an avenue for financial integration and trade and monetary cooperation that operates alongside the bloc's mechanism of political integrations, or the ASEAN Community.

But this mechanism also evolved as an arena of competition over financial leadership, particularly between Japan and China. With China and South Korea skipping the ASEAN+3 meeting, Tokyo has an opportunity to assert its leadership and push for its own alternatives to regional systemic risk control.

China Prepares for the U.S. Re-Engagement in Asia

Nov. 10, 2011: Beijing, which has been carefully developing its strategy for Southeast Asia over the past two decades, understands the challenges posed to it by the United States' re-entry into the region, particularly to its South China Sea plans. The possibility of a new power balance will test both China's ability to achieve its long-term goals and its relations with countries on its periphery.

China's rapidly expanding economic influence in past years has enabled it to improve relations with neighboring states and gradually take a leading role in Southeast Asia, turning it into a testing ground for its strategy of soft-power diplomacy in an important sphere of influence. Beijing's strategy largely has been based on economic cooperation, such as Chinese investment and aid to individual countries and increased trade through bilateral arrangements and regional mechanisms. One example of this is the free trade area that went into effect between China and members of the Association of Southeast Asian Nations (ASEAN), the most extensive set of trade and investment agreements between the two. As Southeast Asia is one of the few regions that generally marks trade surpluses with China, Beijing has attempted to convince ASEAN countries that they will benefit from China's economic growth with its economic clout. China has been making progress with a charm offensive in the region, building political and security influence that has been facilitated by high-level military visits and arms sales, a longstanding policy of noninterference in other countries' internal affairs, and, notably, a decadelong period of relative neglect by the United States.

Partners for U.S. Re-Engagement in Asia

Nov. 3, 2011: The U.S. re-engagement strategy has been centered on ensuring maritime security and providing a pivot point in the region to growing Chinese power. The powers around which Washington hopes to anchor its strategy in the region do not have an interest in damaging their respective relations with Beijing. The interest in the U.S. strategy, however, derives from an opportune alignment of strategic imperatives in which an enhanced U.S. presence provides a point of leverage, ensures freedom of navigation, increases economic opportunities and fortifies the leadership positions of growing powers. For India and Indonesia, U.S. offers of cooperation present unique strategic opportunities.

Aug. 12, 2010: The United States has a Pacific coast and an extensive and longstanding interaction with the Asia-Pacific region, including Southeast Asia. Fundamentally, U.S. global power rests on its control of the oceans, which enables it to protect its own shores and intervene selectively abroad to prevent the rise of regional powers. Maritime Southeast Asia is essentially a bottleneck — marked by the Strait of Malacca, the South China Sea and other minor routes — through which all commercial and military vessels must pass if they are to transit between the Indian and Pacific oceans. The United States thus seeks to ensure that there is freedom of navigation on international waters, that shipping routes remain open and stable and that no foreign power could seek to deny access to the U.S. Navy. This drives the United States to pursue security ties with regional players, to stem militancy and piracy and to preserve the broader balance of power.

Moreover, Washington has an interest in cultivating strong economic ties with Southeast Asia, which has a population of 500 million; produces natural resources and offers low-cost, labor-intensive manufacturing; and is hungry for investment to fuel its rapid development. The financial crisis has inspired the United States to expand these ties both to increase its exports and to tap into new sources of growth. Essentially, the region's economic power is large and growing, and the United States already has a history of trade and security ties with several states. After having played an extremely limited role in the region following the conclusion of the Cold War, the United States is seeking to revive those ties and form new relations with non-allies to reflect changing realities — namely China's economic and military ascent and increasing assertiveness in the region, especially in the South China Sea.