Uzbekistan: A Volatile Equilibrium Between the Clans 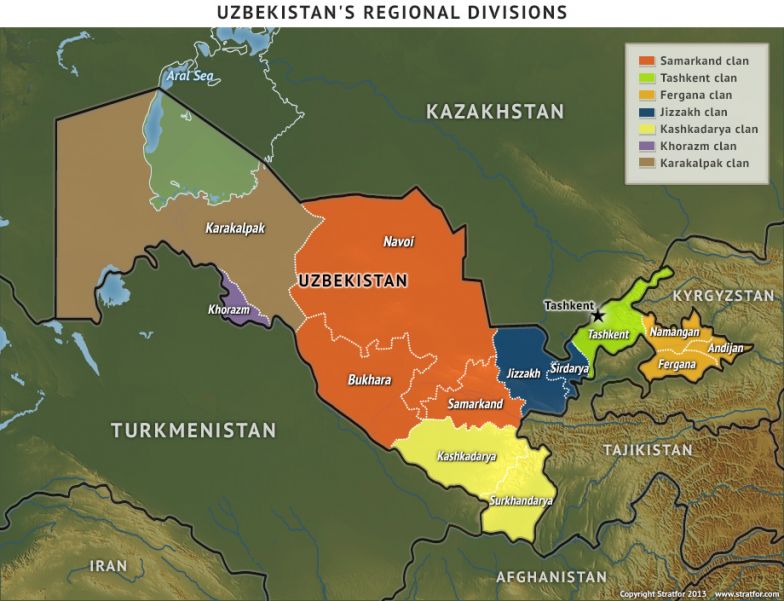 Uzbek President Islam Karimov has kept the country unified under his rule for more than two decades, even though Uzbekistan is deeply split — along geographic and ethnic lines — into clans. These divisions define the political, economic, security and social powers within the country today. Regardless of who eventually succeeds Karimov as president, without him as a grand arbiter between the clans, the volatility among these various groups could erupt into a crisis; in Uzbekistan people more readily identify with their clan than their nationality.

Seven clans now rule in Uzbekistan, divided along 13 provincial lines. Six of the provinces are aligned with (or subjugated under) the other seven. Of those seven clans, three hold the most power: the same Samarkand, Tashkent and Fergana clans from the imperial and Soviet eras. The four smaller clans — the Jizzakh, Kashkadarya, Khorezm and Karakalpak — tend to change alliances and are not generally engaged in elite intrafighting, instead focusing more on their regional businesses and local governance.

With no clear succession plan laid out for when Karimov steps out of office or dies, there are two obvious players from the Samarkand and Tashkent clans jockeying for his position. Moscow played a part in maintaining the balance of power between the clans during the Soviet era, but left up to the clans themselves, it will be hard to replace a figure such as Karimov, who has preserved an equipoise for 25 years. With many powerful figures vying for the Uzbek presidency, the clan struggles are likely to continue for years, particularly as the clan divisions continue defining the power structures in Uzbekistan.

Following a replacement of the Interior Minister in early December, a series of deputies from Uzbekistan's Interior Ministry have been reshuffled or ousted on Jan. 2.  One of the most important power bases of the Samarkand clan, the purge of the Interior Ministry could shift the balance of power in favor of the Tashkent clan. The Tashkent clan has been consolidating its position, systematically breaking down the rival Fergana clan over the last two years. By targeting the powerful Samarkand clan, the Tashkent clan is hoping to dominate Uzbekistan politically, before President Karimov's inevitable retirement from power.

Read more about the Clans of Uzbekistan.