Vietnam is an emerging market economy with 90 million people and exhibits many relevant properties of a transition system. It allows for examination of values and modus operandi of and some basic conditions for entrepreneurship and creativity that could serve the business sector and positive economic reforms. More importantly, economic problems facing the Vietnamese economy, especially the 2007-2012 period, have pushed it to a decisive moment when revisiting theoretical issues of entrepreneurship and creativity becomes critical.

The genuine process of economic reforms in Vietnam that aimed toward developing a full-functioning market economy started in 1995, also when the United States and Vietnam reestablished diplomatic relations. The national economy grew 1996-2000 at an average growth rate (stated in terms of GDP) of 6.9% per annum. This momentum continued in the 2001-2005 period, with annual GDP growth rate accelerating to approximately 7.5% p.a.  During the 10-year period, Vietnam also saw many meaningful developments for a full-fledged market economy to take off. Also during 2001-2005, Vietnam received commitments of official development aid from donor countries – mostly from developed nations – worth $14.7 billion, of which about $7 billion was disbursed into the economy. 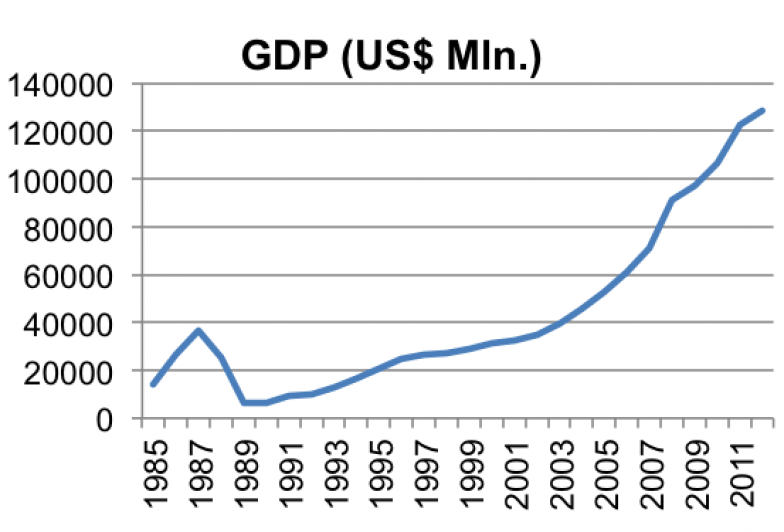 Vietnam’s output in millions of US dollars[1]

Foreign direct investments (FDI) also soared. As of 2011 year end, 13,667 FDI projects were on going, with a commitment of $198 billion. Exports by FDI enterprises accounted for 59% total exports from Vietnam in the year.

In early 2012, new commitments of FDI capital slowed to $6.4bn, but it is expected that disbursement from previous commitments will likely bring the total during FY2012 to about $10 billion.

Despite the good news picture, the party may be drawing to a close.  Chronic economic problems recurred in the 2006-2011 period appeared to prove this.

Vietnam has been a net importer throughout its reform period, since 1986. However, the 2006-2010 period experienced a severe trade deficit, about $12.5 billion per year, or roughly 22% of total exports revenue.  This is a non-trivial increase from the 17.3% ratio of the 2001-2005 period, especially since exports grew faster than the economy’s output expansion.

The emerging economy of Vietnam proved to be inefficient, with wasteful use of physical and capital resources through an indicator called the “Investment-to-GDP” ratio. The higher the ratio is, the less efficient the output productivity of the economy becomes. In fact, this ratio has gone up over three critical phases: 34.9% (1996-2000) to 39.1% (2001-2005) 43.5% (2006-2010), before falling to 34.6% in the crisis year of 2011. The conclusion: the country had to use more scarce resources to finance and support its growth.

Another way to assess how wasteful the economy has become is the measure ICOR (incremental capital to output ratio).  It measureshow many more units of capital investment the economy requires to produce one more unit of economic output. The answer is dismal. Vietnam’s ICOR was around 5:1 during 1996-2005, but increased to around 6:1 from 2006 to 2011.

The result: Vietnam’s growth engine demands 6% increase in input resources to return 1% growth in gross domestic product, while the rest of the East Asian region requires only 3% input increase from the same 1% growth.

Vietnam’s credit supply in 2010 was13.7 times that of 2000, while its GDP doubled in the same 10-year period. By the end of 2011, total outstanding balance of credit was equivalent to 125% of GDP, unnerving the law-makers of Vietnam. Most law-makers voiced their concern about privileges granted to SOEs in acquiring scarce financial (bank credits, subsidy programs, bad debt “restructuring” and even cash injection) and physical assets (land, housing, mines, and other monopolistic pecuniary rights in doing businesses), citing total officially registered borrowings by SOE reaching VND 1,300 trillion ($62.2billion) while their total assets were only $87.7 billion. Total value of equity in these SOEs – held by the state – is estimated at only VND 683 trillion ($32.68 billion).

In the first half of 2012H1, Vietnam’s economy further slowed with expansion of output at a mediocre 4.31% year-on-year. Although optimistic about the chance the economy could be back on track in 2012H2, the World Bank and donors’ community advocated a more cautious growth target of 5.7% for FY2012.

Clearly, there are serious problems facing the Vietnamese economy. Over the first half of 2012, local media constantly reported alarming statistics on worsening economic/business environment in Vietnam with many experts focusing on declining output and tough conditions in which enterprises have been living.

To review, the problems facing the Vietnamese economy include: i) frozen bank credit market, which showed negative growth rate in H1; ii) free fall of real estate market in both prices and scale of transactions; iii) deterioration of the already poor performing SOE sector; and iv) sky-rocketing doubtful debts in the economy.

… Then, adverse impacts on the business sector

In June 2012, Vietnam’s General Statistics Office (GSO 2012) conducted a nationwide survey on 9,331 business firms of different ownerships (state-owned enterprise and private-sector enterprise; SOE, PSE and FDI) over the past 15 months in operation, ending May 16, 2012 to investigate the economic realities within the business sector, which was released in June 2012. The results show that 8.4% of the surveyed enterprises went bankrupt or shut down. Domestic private sector enterprises show the ugliest picture encountering the current economic turbulence with 9.1% failing, followed by SOE 2.7% and FDI enterprises 2.4%. The most serious problems that had led to the failures according to this business survey are: a) Financial losses due to poor performance: 69.9%; b) Shortage of capital 28.20%; and, c) Inability to compete in the marketplace: 14.70%.

Business failures continued to hamper the economic recovery process. Official statistics said that there are nearly 623,000 businesses formally registered by the end of 2011, of which 79,000 went bankrupt and closed, according to a report by World Bank and VCCI on March 14, 2012. However, tax records tell a different story. Only about 400,000 enterprises continue to operate, since all firms in operation should maintain their monthly tax declaration and transactions with local tax division.

Most recently, in June 2012, a poll by the most read local online newspaper unveils the fact that an overriding portion of surveyed people – almost 85% – feel the economy is still in troubled times in 2012Q2, after a very turbulent 2011.