What a Coronavirus Crisis Means for Europe

Tourists wear protective masks outside the Colosseum in Rome on Jan. 31, 2020, amid reports that the new coronavirus outbreak had spread to the Italian capital. As of Feb. 28, Italy had reported 400 cases of the virus and 12 deaths.

Europe's stock markets have plunged in recent days, with its largest economies (Germany, France, the United Kingdom, Italy and Spain) now all reporting upticks in cases of COVID-19, the coronavirus that emerged from China in recent weeks. Stocks in European industries reliant on Chinese supplies, such as in the technology sector, have suffered some of the sharpest losses, along with airline and credit card companies, due to the expected reduction of economic activity in Europe. But with the size and scope of the contagion expected to grow for at least several more weeks, these stock market dips may just be the tip of the iceberg as disruptions to Europe's supply chains, domestic consumption and tourism sector — and potentially even border crossings — begin to more acutely affect the bloc's already slowing economy.

Europe has faced slowing GDP growth in recent months due to external factors, such as global trade disputes. The growing number of coronavirus cases in Europe now risks further impeding economic growth across the bloc and could even place some EU countries on the brink of a recession in the months ahead.

Italy at the Epicenter

As more European countries announce coronavirus cases, stock markets on the continent are taking a beating. On Feb. 28, London’s Financial Times Stock Exchange 100 Index fell to its lowest level since mid-2016, with stock exchanges in major cities such as Frankfurt, Paris, Milan and Madrid suffering sharp losses as well. The pan-European STOXX 600 index, meanwhile, lost more than 9 percent of its value between Feb. 19 and Feb. 26.

The coronavirus outbreak has so far hit Italy’s industrial north, the country’s economic core, particularly hard. The two regions with the highest number of cases to date, Lombardy and Veneto, account for 30 percent of Italy’s GDP. This will have multiple negative effects on the Italian economy, which was already stagnating prior to the coronavirus outbreak. In early February the European Commission predicted that Italy would grow by only 0.3 percent in 2020;  but a recession this year cannot be ruled out. 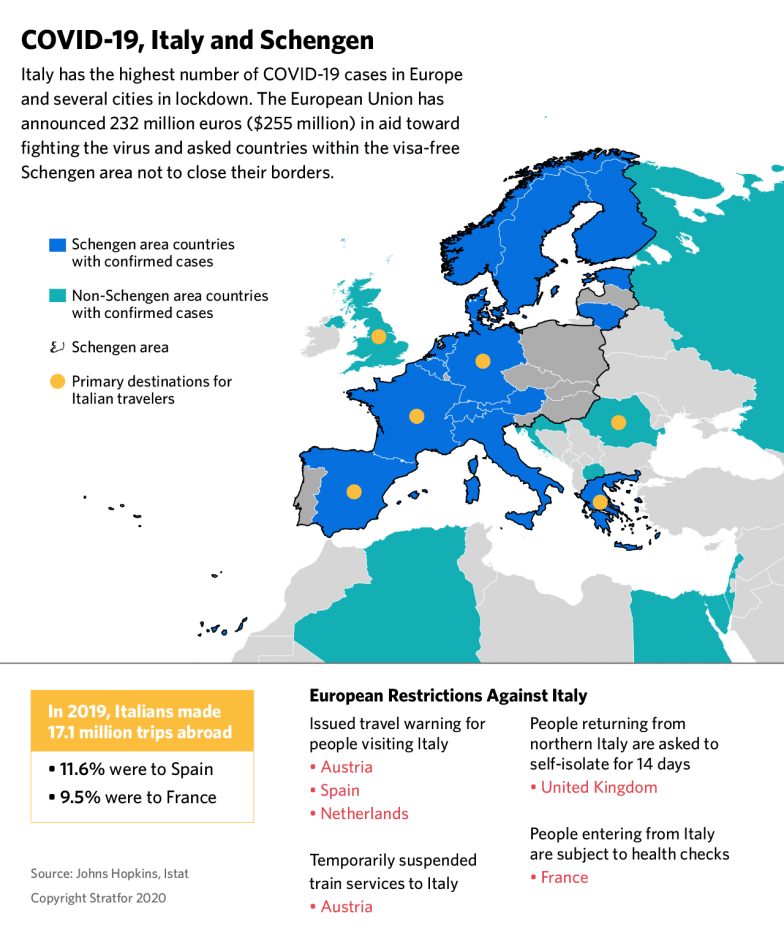 Some factories in northern Italy have shut down temporarily amid the outbreak, while others are now operating with a reduced number of workers. With people (particularly in the north) staying home to prevent contagion, the activity in bars, restaurants, shopping malls, supermarkets and movie theaters has also declined in recent days. Several corporate events and international fairs have been canceled or postponed, which will adversely affect host cities' economies. For example, the Milan Furniture Fair, the world’s largest such event, has been postponed from April to June.

The Italian government will likely ask Brussels for more flexibility in the enforcement of its fiscal rules so that it can increase public spending to boost economic growth and grant tax cuts to the areas affected by the outbreak. The European Union will likely accept these measures, though they could end up further adding to Italy’s large fiscal deficit. Because of Italy's high debt levels, the European Union had called on Rome to reduce its deficit, though this will probably now have to wait.

The contraction in industrial activity in northern Italy will also disrupt supply chains across Europe. Italy is one of the most industrialized countries on the continent, and its exports are part of the supply chains of countries such as Germany, Austria and France, where some industries depend on Italian components (such as auto parts) for production. According to a report by an Italian industrial association, coronavirus-related disruptions will become particularly acute if they persist past mid-March.

Along with Italy, China is another key supplier for European industries. The Asian giant provides supplies such as auto parts, microchips and chemicals to European factories. But as the global epicenter of the new coronavirus, China is facing even more severe industrial disruptions. To offset the loss of Chinese imports, European companies could look for alternative suppliers within the bloc. While this could create new business opportunities for European firms, many may not be able to match the competitive prices offered by their Chinese counterparts.

The coronavirus outbreak is also threatening the capabilities of healthcare systems across the European Union. Fearing that panic could collapse their healthcare facilities, some countries, including Spain, have told people to get tested only if they have clear symptoms or have recently visited risky areas, such as northern Italy.

The most immediate effect of the coronavirus outbreak in China was a sudden reduction in the number of Chinese tourists visiting Europe. This is not a minor issue, considering that some 6 million Chinese nationals visit Europe every year. In recent weeks, dozens of airlines have canceled or modified their routes to China, while some have also canceled flights to Italy. Germany's largest airline, Lufthansa, for example, announced a freeze in new hires on Feb. 26, and said it would offer unpaid leave to some of its employees to counteract the economic impact of the coronavirus. The announcement follows Lufthansa's move to reduce flights to Hong Kong and cancel all flights to and from mainland China earlier this month as demand fell. Other European airlines, including British Airways, Finnair and Easyjet, have also said that falling bookings and canceled routes due to the outbreak are hurting their operations.

With Europe now beginning to develop its own cases of coronavirus, several governments have warned their citizens to restrict travel as much as possible. Countries like the United States, Germany, Austria and Spain issued travel warnings for Italy. The virus outbreak will inflict a toll on the travel sectors in other European countries as well, as some of the most prominent virus cases have taken place in popular tourist destinations. Several countries have already canceled or postponed cultural, business and sports events.

As new cases of coronavirus continue to emerge in Europe for at least several more weeks, political pressure on national governments to introduce border controls will grow.

This is especially concerning for Southern Europe, where tourism represents a significant source of economic activity. While the calculations vary, tourism represents around 16 percent of Spain's GDP, 13 percent of Italy's, and almost 10 percent of France's. Coronavirus cases in high-profile tourism destinations such as Spain's Tenerife Island (where 1,000 people were locked down for days after some hotel guests tested positive for the virus) risk cutting into this crucial revenue stream. Such disruptions, combined with travel warnings by governments and growing fears of contagion, will probably result in an overall reduction of travel in Europe in the coming weeks. If the outbreak continues into late March, it could disrupt travel around Easter in mid-April, one of the most active periods of the year for tourism in Europe.

The coronavirus outbreak risks putting the passport-free Schengen area under stress. So far, the European Commission’s official position is that there is no need to reintroduce border controls on the continent. But as new cases of coronavirus continue to emerge in Europe for at least several more weeks, political pressure on national governments to introduce border controls will grow. Opposition parties will use the coronavirus crisis to accuse governments of not doing enough to protect their populations. The virus will offer nationalist-oriented parties in particular even more fodder to attack EU institutions and demand tighter border controls. The leaders of Italy’s League Party and France’s National Rally have both already demanded the reintroduction of border controls, blaming the Schengen area for facilitating cross-border contagion.

The reintroduction of border controls, however, would risk further harming the economies of the Schengen countries by slowing the transportation of products and the movement of workers and tourists across borders. The World Health Organization has also spoken against the introduction of unilateral restrictions to travel, as it's not a given such efforts would reduce contagion. Indeed, Italy suspended flights to China, but it still became the European epicenter of the coronavirus outbreak in Europe.

Every Member for Itself?

While the expansion of the coronavirus across Europe will continue to dampen economic activity across the continent for weeks, a cohesive, coordinated reaction by the European Union is unlikely. On Feb. 24, the European Commission announced a 232 million euro ($244 million) package of measures to combat the coronavirus outbreak in Europe. The package allots 114 million euros to support WHO efforts; 100 million euros for diagnostics, therapeutics and prevention research; 15 million euros to support rapid diagnosis and epidemiological surveillance in African countries; and 3 million euros for repatriation flights of EU citizens from Wuhan. However, this is far from a package meant to stimulate the European economy. The European Central Bank, for its part, is running out of tools to boost growth: interest rates are already at record low levels and new programs, such as the expansion of the bond-buying quantitative easing, are controversial in the eurozone.

As a result, individual countries will, for the most part, be left to their own devices to respond to the virus, though financial and political realities will limit their ability to do so quickly and efficiently. Already-high levels of debt and deficits will constrain southern European governments' room for action, while many of the more fiscally conservative governments in northern Europe will be wary of funding an expensive stimulus package aimed at countering the outbreak's economic impact. External factors will also play an important role here, as a slower-than-expected economic recovery in China could further delay Europe's economic recovery by producing ripple effects on global supply chains and trade.