What to Expect After the Downing of a Russian Fighter Jet

Turkey's downing of a Russian fighter jet in Syria has raised the stakes in an already crowded and complicated conflict. The Nov. 24 incident will also likely undermine efforts to find a solution to the country's protracted civil war.

Since Syrian air defenses intercepted a Turkish aircraft on June 22, 2012, resulting in its destruction and the deaths of its two pilots, the Turkish air force has maintained an assertive stance toward aircraft that violate Turkey's border with Syria. On Sept. 16, 2013, Turkish fighter jets shot down a Syrian Mi-17 helicopter that flew into Turkish airspace; about six months later, a Syrian MiG-23 that reportedly strayed into Turkey's airspace met a similar fate.

The number and frequency of incidents in the air above the Turkey-Syria border have risen since Russia's Sept. 30 intervention into the Syrian conflict. Turkey has lodged many complaints against both Russia and Syria, alleging numerous airspace violations (including one confirmed by Russia in which an Su-30 accidentally crossed into Turkey) and the harassment of Turkish aircraft patrolling the border region.

Over the past week, as Russian forces backed several loyalist offensives against rebels in the area, Russia's aerial activity near the Turkey-Syria border has been particularly high. The rebel groups, including the 1st Coastal Division, the 2nd Coastal Brigade and the Sham Brigade, contain a large number of Turkmen fighters and are closely linked to and supported by Turkey, further stoking Ankara's anger over Moscow's presence in Syria.

One thing that remains unclear is the fate of the Russian pilots. Videos and photographs taken at the scene suggest that rebels on the ground shot and likely killed them as they descended with their parachutes. However, a number of Turkish officials have said they believe the pilots are still alive. If this is true, Ankara could use its connections with the rebel groups to quickly transfer the pilots back into Russian custody, somewhat defusing the situation. But if they are dead, Russia will probably ramp up its operations against the rebels in the area, exacerbating tensions with Turkey. 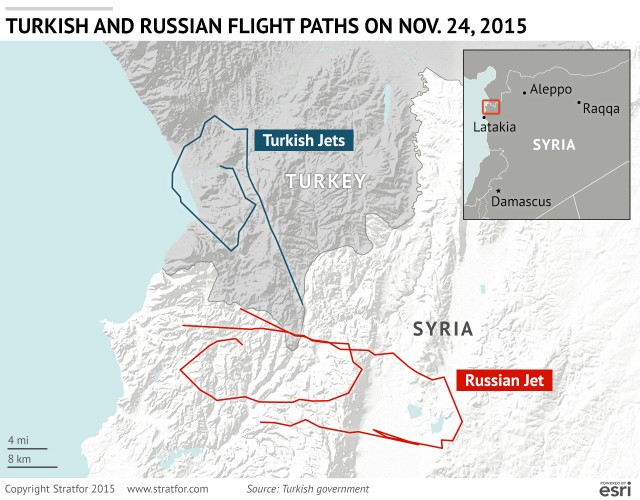 The destruction of a Russian search-and-rescue helicopter sent to find the downed jet's crew will only aggravate the situation more. Rebels brought down the helicopter with small arms fire, killing one Russian marine, and then destroyed it with a TOW anti-tank guided missile — a weapon built and supplied by the United States. Even though the rest of the crew survived the attack, Russia will not be pleased that another outside party's weapons are being used against it in the fight.

Peace Moves Further Out of Reach

The incident with the fighter jet will no doubt raise the risk of clashes occurring in the airspace over Syria. The United States had made considerable progress in deconflicting Syrian airspace by signing a memorandum of understanding with Russia that laid out procedures to prevent problems from arising as each side carried out airstrikes. But with the Russians angry at the Turks, and the Turks operating in close concert with the Americans — especially in the planned anti-Islamic State operation over northern Aleppo — the United States and its coalition partners may find themselves drawn into the spat between Ankara and Moscow. Therefore, in spite of any prior agreements that have been reached, the United States and its partners will be far more wary of any Russian or loyalist aircraft they encounter in the conflict. So although this incident alone will not halt airstrikes against the Islamic State in Syria, coalition forces may modify the structure of the strikes to include more protection against any potential action by Russian or Syrian government aircraft.

The dispute will also undermine ongoing attempts to find a solution to the Syrian civil war, especially since Turkey is an important foreign patron of many of the rebel groups that were expected to have a seat at the negotiating table. With video circulating of Turkmen fighters from these units shooting at the Russian pilots, Moscow probably will no longer accept their participation in the talks. Since some of these groups also belong to the Free Syrian Army and are part of Syria's more moderate opposition, this will make it much more difficult to reach a roster of representatives that all sides can agree on before heading into negotiations. And as long as talks on a power-sharing agreement in Syria remain elusive, the foreign sponsors of the Syrian civil war will be dealing with an increasingly complex battlefield.

Navalny’s Jailing Will Solidify Russia’s Standoff With the West