What to Expect After the Nov. 13 Paris Attacks

As many as 60 people died Nov. 13 in multiple terrorist attacks throughout Paris. At least five gunmen – likely jihadists judging from witnesses' accounts – conducted the attacks.

Timeline of the Attack

The attacks, which were clearly coordinated, took place in multiple locations and involved different methods. In the first wave, two suicide bombers detonated their explosives at locations near the Stade de France, where a soccer match between France and Germany was taking place. (French President Francois Hollande himself was at the stadium at the time of the attack. He was escorted from the scene and met with French Interior Minister Bernard Cazeneuve in a closed meeting shortly thereafter.) It is unclear whether grenades or other explosives were used, and it is possible a suicide bomber may have been involved.

Meanwhile, gunmen also opened fire, reportedly with Kalashnikov rifles, on a tightly packed Cambodian restaurant in a drive-by shooting. Shots were also fired at the Bataclan concert hall, where a hostage situation is now underway.

Roughly 25 minutes later, gunmen also opened fire on Rue de Charonne. And about an hour after the initial attacks, attacks by other terrorist cells took place at the Louvre and Les Halles.

Special police units, including RAID, a police intervention unit, have been rapidly mobilized and are currently securing the areas around the stadium, the bars and restaurants in the area of the 10th and 11th arrondissement, a part of Paris popular with young people and tourists, and the Bataclan concert hall, where at least some of the gunmen, allegedly armed with explosives, are reportedly located and holding up to 100 hostages.

Events in Paris could evolve rapidly – the standoff with the gunmen at the Bataclan concert hall could end at any moment if the French special police units believe that the gunmen are going to harm the hostages.

Though shocking, the attacks are not completely surprising. Multiple individuals from France and other European countries have traveled to Syria to join extremist groups there. As the Charlie Hebdo attacks have also demonstrated, there is a persistent risk of terrorist attacks within Europe. An important question going forward is whether the attacks were entirely grassroots in nature or whether the assailants received instruction or assistance from abroad from groups such as the Islamic State or al Qaeda. Furthermore, the recent influx of refugees into Europe from places such as Syria highlights the risk that jihadist groups could have placed some of their members among the large refugee flow in order to conduct attacks in Europe.

In an address to the nation, French President Francois Hollande said that the country will close off its borders. The French government will prioritize immediately locking down the city, protecting civilians and capturing the attackers. The next piece of that will be to close down transportation and the borders to prevent any perpetrators from escaping. Finally they will begin to investigate to uproot the parties responsible for the attacks. Notably, Hollande has officially declared a state of emergency. 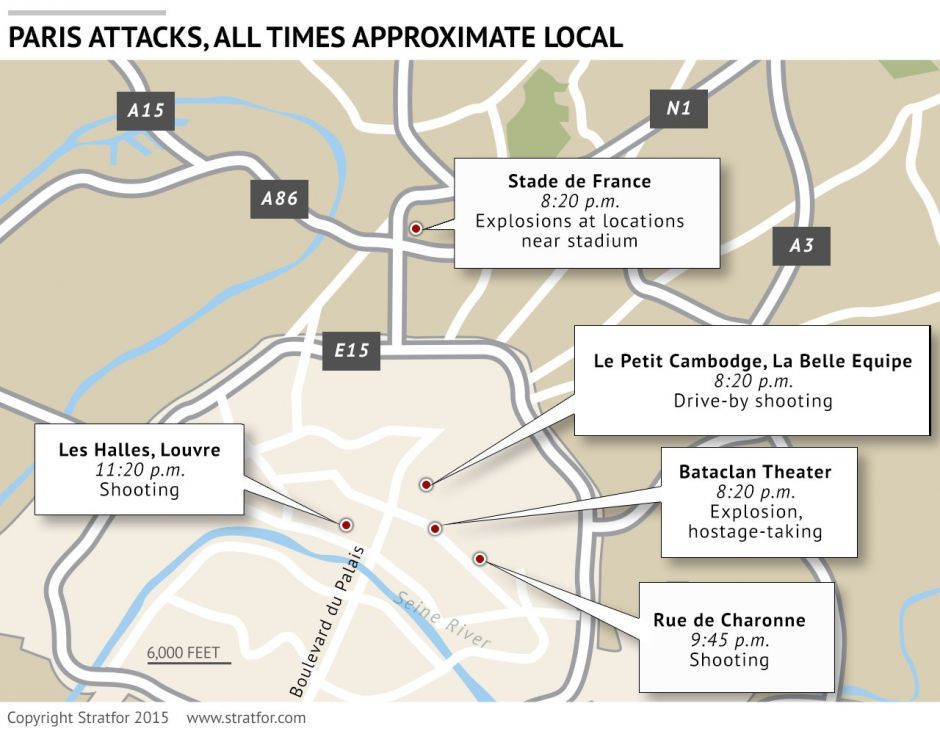 The attacks will surely have political consequences. They come five days before France's only aircraft carrier, the Charles de Gaulle, is due to set sail for the Persian Gulf for actions against the Islamic State in Iraq and Syria. France has been carrying out airstrikes in Syria since late September. Should the attacks be traced back to the Islamic State's core area of operation, France will probably deepen its involvement in anti-Islamic State operations in Syria and Iraq at a time when the Syrian battlefield in particular is becoming crowded and complicated.

From a political perspective, the attacks are a reminder of France's longstanding ethnic frictions following several months in which the focus has been on neighboring Germany. High numbers of migrants have been entering Germany from the east and south, with very few carrying on to France. As a result, France has kept a relatively low profile in the attempts to stem the flow of migrants, though it has been present at the numerous summits on the issue and has supported Germany's push for a relocation of asylum seekers across Europe. Nevertheless, this event can be expected to strengthen the argument of those groups that have been calling for a halt in the flow of immigrants and the closing of borders in countries such as Germany, Sweden and much of Central and Eastern Europe.

In the wake of these attacks, Marine Le Pen and her far-right National Front party could see their popularity rise. Le Pen kept a low profile after the Charlie Hebdo shooting in January and still saw an increase in her party's popularity because of its longstanding anti-immigration message. Hollande also saw a brief uptick in popularity after the Charlie Hebdo attack because of his reaction to the events, but a repeat of this trend is not expected because people will now question whether the anti-terrorism measures that were approved this year actually worked. The leader of the center-right Republicans Party, Nicolas Sarkozy, also has a history of taking a strong stance on security issues; he was campaigning on the subject only last week. He is expected to battle the milder Alain Juppe for his party's nomination in the 2017 elections, and voters may swing to his side in the wake of the attacks.

In Mozambique, Militants Will Gain Ground Until They Threaten the Government