Why Russia Will Send More Troops to Central Asia

Russia is making a concerted effort to increase its military and security presence throughout Central Asia, just not for the reasons it would have you think. Though the Kremlin is concerned with the threat of spillover violence from Islamist militancy in Afghanistan — its purported motive for deploying more troops — it is far more alarmed by what it sees as Chinese and Western encroachment into lands over which it has long held sway. It is this concern that will shape Moscow's behavior in Central Asia in the years to come.

Central Asia has played an important role in the projection of Russian military power since the Russian Empire's expansion in the 18th and 19th centuries. During this period, Russia established military outposts as it competed with the British Empire for influence in the region. By the mid-19th century, Russia had brought modern-day Kazakhstan, Uzbekistan, Turkmenistan, Kyrgyzstan and Tajikistan into its empire. In the early 20th century, the countries were incorporated into the Soviet Union.

After the collapse of the Soviet Union, Russia retained a military presence in Central Asia and played a major role in regional conflicts, such as the 1992-1997 Tajik civil war. Today Russia still has military bases in Kyrgyzstan and Tajikistan. Kazakhstan is a member of the Collective Security Treaty Organization, a military bloc dominated by Moscow. And while Uzbekistan and Turkmenistan are not members of the bloc, they do have important security and military ties with Russia through arms purchases.

Russia's long-standing influence in Central Asian military affairs frames several of the country's recent moves. On April 2, the base commander of Russia's 201st military base in Tajikistan said Russia would increase the number of troops stationed there from 5,900 to 9,000 over the next five years and add more military equipment through 2020. Then on April 3 an unnamed source in the General Staff of the Russian armed forces told Kommersant that Russia was prepared to grant Tajikistan $1.2 billion in military aid over the next few years. Russian military specialists were reportedly dispatched to Turkmenistan's border with Afghanistan on March 24 as well. Turkmen officials have yet to confirm this, but local media report that Ashgabat requested Russian assistance to protect the Afghan border. 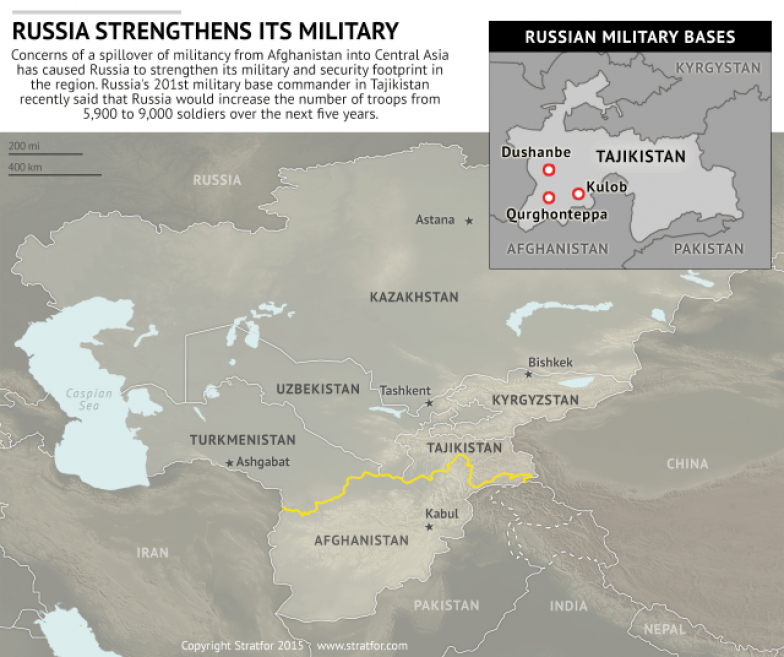 Officially, these developments are tied to growing concern over violence spilling over from Afghanistan into Central Asia. It is a legitimate fear for many Central Asian governments as NATO and the United States draw down their forces in Afghanistan. Regional governments have voiced discomfort with the increased militant presence in northern Afghanistan, including the Taliban and the Islamic State.

Russia has echoed this fear. Russian President Vladimir Putin's special representative for Afghanistan alleged that Islamic State fighters in the north are training thousands of militants near the Tajikistan and Turkmenistan borders. Collective Security Treaty Organization summits have focused on the issue, and Tajikistan urged the bloc to do more to counter the threat at the April 1-2 Dushanbe summit.

Despite a definite uptick in militant attacks in northern Afghanistan, no concrete evidence has emerged of attacks over the border in Central Asian states. Central Asia's last major wave of regionwide militancy was 1999-2001, when the Islamic Movement of Uzbekistan conducted attacks in the Fergana Valley in Tajikistan, Kyrgyzstan and Uzbekistan. The U.S. intervention in Afghanistan following 9/11, however, wiped out much of the group. Surviving elements then dispersed throughout the Afghanistan-Pakistan border area.

Since then, Uzbekistan, Tajikistan and Kazakhstan have seen some attacks by Islamist militants. But many were related to political dynamics, not the movement in Afghanistan. A spillover of Afghan militancy is possible, but so far the threat is minimal.

Because Islamist spillover from northern Afghanistan is still a relatively minor threat, Russia's push into Central Asia may have other motivations. Moscow is engaged in a tense standoff with the West over Ukraine, just one theater in the competition for influence along the former Soviet periphery. Central Asia is another key region in this contest. The region possesses sizable oil and natural gas resources that are attractive to the European Union as it seeks to diversify energy supplies and end its dependence on Russia. Europe has already pursued Turkmenistan to join the Trans-Caspian pipeline project.

The United States has also been active in Central Asia, particularly from a security standpoint. The United States no longer uses Central Asian military bases that had been logistical centers for operations in Afghanistan, such as the Manas Air Base in Kyrgyzstan or the Karshi-Khanabad Air Base in Uzbekistan. These bases, however, have left a regional legacy. Washington maintains some security operations that include counternarcotics training with Kyrgyzstan and Tajikistan.

The United States has also expressed interest in increasing its commitment. The commander of U.S. Central Command, Gen. Lloyd Austin, said the United States was willing to provide military equipment and technology to support Turkmenistan's efforts to secure its border with Afghanistan. The United States also announced in January that it would grant over 200 Mine Resistant Ambush Protected vehicles to Uzbekistan previously used in the U.S. Northern Distribution Network in Afghanistan. Such gestures point to a U.S. desire to develop more cooperative security relationships with Central Asian states.

Moscow's military and security expansion efforts stem partly from its concern about these gestures. But Russia has not limited itself to deploying military personnel. Moscow has expanded the scope and membership of its Eurasian Union to include broader cooperation on issues including border controls. Kazakhstan is already a member, and Kyrgyzstan will soon join. Russia increased the number of exercises held by Collective Security Treaty Organization members. It also called on Uzbekistan and Turkmenistan to cooperate more with the security bloc, though both have been hesitant.

However, Moscow's ability to solidify its position in Central Asia will be limited. Russia has a weak economy. Already, many Central Asian migrants who once worked in Russia have left, causing a decline in Russian remittances to the region. The West, and particularly the United States, will continue to have influence in the region. China, too, will continue to make economic and energy inroads.

Meanwhile, instability in the region will probably increase. Kazakhstan and Uzbekistan both have potential succession crises in the offing. Moreover, demographic growth and competition over water resources are likely to threaten the region's security. Russia will see its position in Central Asia tested in the coming years. Islamist militancy is just one concern among many for Moscow and Central Asian governments.