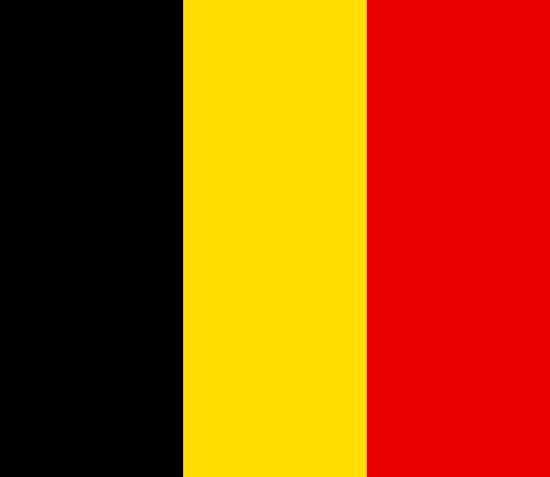 Belgium's history has been shaped by its location at the crossroads between Latin and Germanic Europe. Belgium is surrounded by France, the Netherlands, Germany, Luxembourg and the North Sea. It is home to a Flemish community in the north, which is mostly Dutch-speaking, and a Walloon population in the south, which mostly speaks French. Belgium's location also has made it a land of invasion, as it was for centuries disputed by larger powers such as Spain, France and Austria. Belgium gained independence in the 1830s, which was followed by a process of heavy industrialization and colonial expansion, particularly in Africa. Belgium is a mostly flat country, with a coastal plain full of polders in the northwest, a plateau with numerous waterways and fertile lands in the center, and thick forests and hills in the south. Belgium's core is in the so-called Flemish Diamond, an area that includes Brussels, Belgium's capital; Antwerp, which is home to one of the busiest ports in the world; and Ghent and Leuven, two important cultural and industrial centers. Almost half of Belgium's 11 million people live within this area. Belgium is also home to some of the most important institutions of the European Union, making Brussels the bloc's unofficial capital. Belgium's politics are defined by its linguistic and economic divides. A series of reforms between the 1970s and the 1990s made Belgium a federal state, in which Flanders and Wallonia were given some degree of self-government. But this was not enough to appease autonomist and secessionist sentiments, especially in Flanders, which is more economically developed than Wallonia. Belgium's federal government also has to include political parties from the two communities, which many voters see as inefficient. Belgium's main geopolitical challenge, therefore, is to remain united as a country. Domestic politics will play a role in this, but so will the evolution of the European Union, to which Belgium is deeply intertwined.