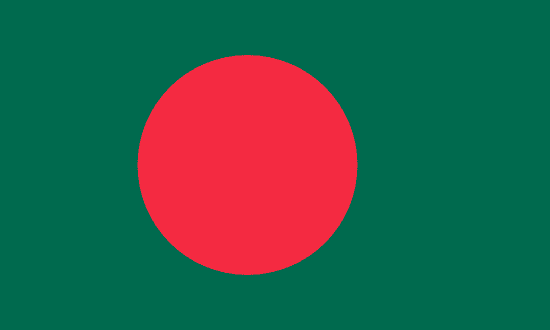 Bangladesh is a democratic republic located in South Asia. India borders it to the north, east and west, while Bangladesh shares a narrow southeastern border with Myanmar. Rivers are the defining geographic feature of Bangladesh. The country is home to the world's largest delta, as two of South Asia's major rivers — the Ganges, known locally as the Padma, and the Brahmaputra — converge with the Meghna River to drain into the Bay of Bengal. (Bangladesh has a 580-kilometer, or 360-mile, fractured coastline.) The delta plain covers about 80 percent of the country's 147,570 square kilometers (57,000 square miles), while hilly terrain and highlands comprise the rest. Bangladesh's low-lying elevation and numerous river systems make it prone to frequent flooding. Its tropical monsoon climate aids in the cultivation of rice, the country's main crop. Historically poor, Bangladesh has shown a high and sustained economic growth rate in recent years, even as climate change looms as a long-term threat. Before achieving independence in 1971 as a result of a war between India and Pakistan, Bangladesh was known as East Pakistan and was carved out during the Partition of 1947 from Bengal, a historical region that also includes the Indian state of West Bengal. Unlike other South Asian countries, Bangladesh is a relatively homogeneous country with 98 percent of the population speaking Bengali. Bangladesh is one of the world's most densely populated countries, and its capital, Dhaka, is among the world's most populous cities. As a lower riparian state nearly surrounded by India, which thus comprises its most consequential international partnership, Bangladesh's primary geographic challenge is to ensure water security, while breaking out of its poverty and limiting New Delhi's dominating presence. In the long term, Bangladesh also needs help in adapting to the damaging effects of climate change. Weak boundaries have also meant that Bangladeshi migration into West Bengal and India's northeast has been a source of contention. Similarly, Rohingya migration from neighboring Myanmar into eastern Bangladesh historically has been a sore spot between Dhaka and Naypyidaw.