Obstacles to a Syrian Regime Victory in Aleppo

In the wake of their seizure of Qusair in western Syria, Syrian loyalist forces are bent on capitalizing on their newfound momentum by wresting more of the loyalist core from the rebels and advancing on rebel-held territory. In order to continue their advance, however, loyalist forces will have to address logistical difficulties, potentially fight through powerful rebel blocking positions and overcome increasing U.S. weapons aid to the rebels.

The regime has by and large proved that the loyalist core is not seriously threatened at the moment. However, for their resurgence to seriously undermine the rebellion, the loyalists would need a victory in Aleppo. Seizing Aleppo would simultaneously give the loyalists effective control of the vast majority of Syria's population centers, defeat perhaps the largest concentration of rebel forces and inflict a terrible blow to the rebels' morale.

The regime's offensive in the critical city of Homs, which connects Damascus, Aleppo and the Alawite-dominated coast, has not stopped with the successful operation in Qusair. Instead, loyalist forces continue to target remaining rebel positions in the governorate. Several rebel villages south of Homs have been stormed, and troop movements and bombardment patterns suggest the regime will likely stage additional attacks on rebels in Homs city proper and around Rastan and Talbiseh along the M5 highway, which leads from the Jordanian border, through Damascus and all the way north to Aleppo. 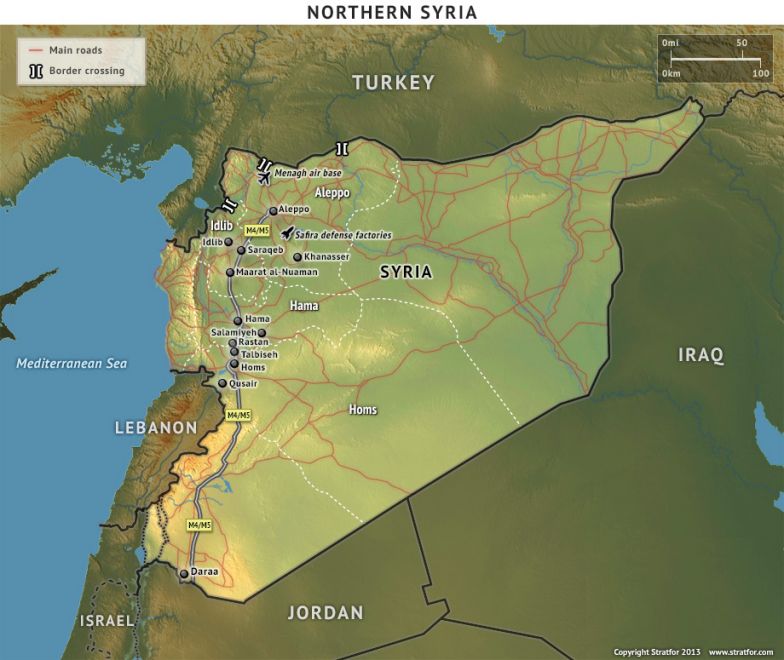 Lebanese militant group Hezbollah has committed significant manpower to the Syrian regime's recent successes in the west. Despite Hezbollah's high casualty rate in the fighting, the investment in the conflict has paid off so far. As long as Lebanon — and more specifically Hezbollah's core operating areas — remains unthreatened, Hezbollah can continue to focus on supporting loyalist forces in Syria. However, Lebanon's security is strained, and tensions and violence are increasing every day. If Sunni forces begin to seriously threaten Hezbollah's interests in Lebanon, the paramilitary group may be forced to recall its forces.

Syrian loyalist forces are also on the offensive in Damascus and in the south. Having mostly isolated the sizable rebel pocket in the Eastern Ghouta region with the seizure of Otaiba, loyalist forces continue their efforts to reduce the rebel pocket, though they have yet to make much headway. Similarly, the regime will continue to attempt to advance in the south toward Daraa in order to reinforce its position there and to cut rebel supply lines from Jordan. However, the rebels in the south have been greatly strengthened since January and they are still making gains, such as their successful operation in Inkhil during the week of June 9.

Meanwhile, the regime has remained active in Aleppo and has in fact launched a number of local attacks against the rebels from positions within the governorate. Airstrikes and aerial resupply operations have been greatly accelerated over the past two months, with helicopter resupply missions to the Shiite villages of Nubl and al-Zahraa being especially prominent.

The regime has convinced the Shia residents of the villages to raise a 1,500-man militia by promising them government jobs, weapons, money and the establishment of the villages as the centers of Aleppo's countryside. Bolstered by supplies, Republican Guard officers and even, reportedly, Iraqi and Hezbollah fighters, the militia has been directed to attempt to relieve the besieged Menagh military airport further to the north while attempting to link up with loyalist forces in Aleppo city proper to the southeast. Regime forces within the city have also launched their own attacks, particularly in the neighborhoods of Tishreen, Ashrafiyeh, Suleiman and Sakhur. Despite local victories, it is doubtful that regime forces in Aleppo can achieve many long-term gains in the province without the help of a significant loyalist push from the south.

Logistical and Other Challenges

For all the regime's announcements of an imminent victory in Aleppo, it is important to remember the very significant obstacles. Many of these are in fact the same that prevented the regime from ousting the rebels from the city in summer 2012.

There are, in effect, two ways that the regime can reach Aleppo in force. The first involves a thrust northward along the M5 highway from Hama. The M5 highway would offer the regime the best supply infrastructure leading to the city, greatly alleviating the logistical burden necessary to support a considerable mechanized advance on Aleppo. However, there are a large number of significant rebel positions along this route. The advancing force would have to pass through northern Hama governorate; Maarat al-Nuaman and Saraqeb, Idlib governorate; and Khan Tuman and Khan Asal, Aleppo governorate. All of these positions would have to be seized or reduced before the regime could advance without fearing for its supply route.

To maintain the integrity of the M5 route, the loyalist forces would also need to displace the rebels from the immediate area of the highway and leave enough security forces along the route to maintain its ability to function. This would be no easy feat. In fact, in some areas along the M5 highway — such as Morek, which the rebels seized June 13 — the rebels are actually advancing.

The regime's second option to reach Aleppo is to skirt the main M5 highway and instead take secondary roads from Salamiyeh to Khanasser, avoiding or defeating the new rebel offensive in the eastern Hama plain. From there, the force would move north to link with the outer reach of the regime position in Tall Sughayb and the Safira defense factory in Aleppo governorate. Even though this route avoids the bulk of rebel forces along the M5 highway, it is not clear that the secondary roads have the capacity to support a large regime offensive. In any case, the rebels have already recognized the potential for this route and have placed some units in a blocking position, ensuring that an advance would not be unopposed.

Complicating the regime's future battle plans even further is the recent U.S. decision to increase the arming of the rebels. There will likely be a combination of more direct aid from the United States and looser restrictions on the quantity and quality of weapons that other states are already providing. The United States is moving toward a more prominent role in arming the rebels, but at least initially its involvement will be heavily tempered by its desire to avoid putting weapons, particularly man-portable air-defense systems, in the hands of extremist groups.

Regime forces are making progress, but they need a victory in Aleppo before they can legitimately claim to be close to undermining the rebellion. In order for the loyalists to seriously threaten the rebel position in Aleppo, they need to be able to reach the area with a force of considerable size and to keep that force supplied.