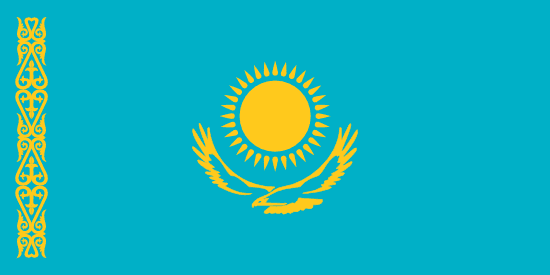 The ninth largest country in the world, Kazakhstan rests in the heart of Central Asia, bordering Russia to its north; China on its east; Uzbekistan, Kyrgyzstan and Turkmenistan along its south; and the Caspian Sea to its west. The defining feature of Kazakhstan is the Kazakh Steppe, a large dryland stretching across more than 70 percent of the country. Only 12 percent of the country's land is arable, and the majority of that is in the north connecting into Russia's agricultural belt. There is also a large pocket in the south. This expanse has largely pushed the population of nearly 18 million to the outer borderlands. The steppe is encircled by a series of sizable mountain ranges. The core of the country lies in the corridor stretching across the Shymkent (also known as Southern Kazakhstan) and the Almaty region, where the climate is warm compared with the inhospitable deserts of the steppe. This stretch of land lies in the Syr Darya river basin, creating a fertile pocket of land protected to its east, west and north by mountain ranges. Shymkent and Almaty were some of the largest stopping posts along the Silk Road, and they now have the country's densest population and swaths of the financial, industrial and agricultural sectors. To the region's south lies the Fergana Valley in Uzbekistan — a vulnerable point to its core. The Kazakh economy is dominated by its energy sector, making up nearly 20 percent of the gross domestic product. The country exports 78 percent of its oil production, regionally and along large trunk lines to China and Russia. Along with its agricultural and metals wealth, Kazakhstan's energy sector has made the country highly valuable to its neighbors. In recent decades, the country has positioned itself as the financial hub of Central Asia, tying in the banking systems of its smaller neighbors. Kazakhstan maintains strong ties with Russia, which reach back to its empire and Soviet phases. But the government in the capital, Astana, is also developing links to China and other players to balance Moscow. The country tries to maintain working relationships with its smaller neighbors, who have seen bouts of instability. Kazakhstan's challenges stem from its mostly hollow interior, from encroaching large powers and from the potential instability of smaller regions on its border.