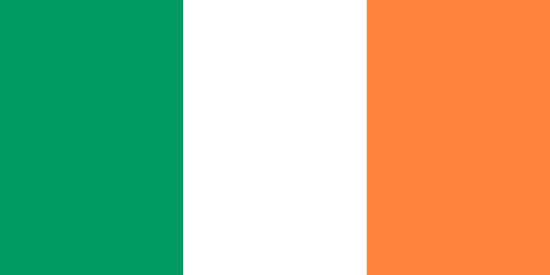 The Republic of Ireland lies on an island to the northwest of continental Europe and is separated from Great Britain by the Irish Sea. The island itself is a low plain surrounded by a ring of coastal mountains. Western Ireland, exposed to harsh weather from the Atlantic, is less habitable than the east. The River Shannon, the longest river in the British Isles, bisects the island and has been important for both navigation and as a strategic boundary. Agriculture historically was Ireland’s primary economic activity and a lack of coal and iron delayed industrialization. The great famine of the mid-19th century caused mass immigration and by 1911, Ireland had only about half of its peak population. The country’s rugged coast prevents natural ports, restricting trade in all but a few places. One of those places is Dublin, the capital. Dublin’s vicinity to Great Britain has also helped make it Ireland’s economic center. But Ireland’s reliance on Britain has been a source of conflict for hundreds of years. Currently the island is split between the predominantly Catholic Republic of Ireland, which has about 80 percent of the island’s territory and accounts for 70 percent of its population, and the predominantly Protestant Northern Ireland, which is part of the United Kingdom. In 1973, Ireland joined the European Community, the entity that preceded the European Union. In the early 2000s, Ireland became one of the founding members of the eurozone. Modern-day Ireland is a services-based economy with an important presence of foreign direct investment. Because of Ireland’s relative isolation from mainland Europe, rugged topography and lack of natural resources, the island has struggled to form a united country capable of defending against outside powers, especially the United Kingdom.