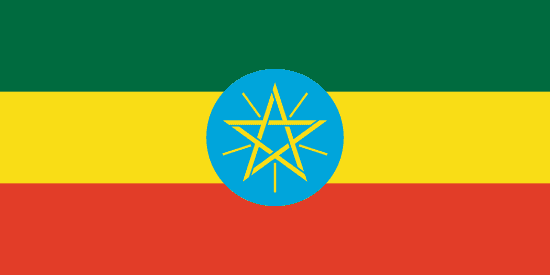 Ethiopia is an ancient African country bordered by Eritrea, Djibouti, Kenya, South Sudan and Sudan. Ethiopia's relatively large population of 100 million people has helped the country establish itself as a regional heavyweight in East Africa. Its extensive mountain system, which surrounds the fertile lowland core of the country, is key to understanding Ethiopia's diverse ethnic composition and how it relates to its neighbors. Invasion is not a major concern for Ethiopia, as the northern Ethiopian Plateau and the Ahmar Mountains almost completely surround the lowlands. In the northeast, the Awash River Basin opens to the coastline, but even this area gains a certain measure of protection from its extreme desert conditions. The country's capital, Addis Ababa, sits at an elevated position overseeing the lowlands, where the majority Oromo and Amharic peoples merge with several less populous mountain cultures. Ethiopia's greatest challenge is uniting these disparate groups. Financially, Ethiopia's export and import costs are high because neighbors Djibouti and Eritrea block its sea access. North of the lowland core, the Ethiopian Plateau serves as the country's breadbasket, growing wheat, barley, corn and the staple crop teff. These highlands form an extensive drainage system that creates the most fertile land in the region. Within this region lies Lake Tana, the source of the Blue Nile River, which is the largest tributary of the greater Nile River. Much of Ethiopia's coffee is grown at the fertile apex of the Ahmar Mountains, which are south of the lowlands. Those mountains descend into the arid Ogaden desert, which was acquired in the 19th century and remains disconnected from the core. While it provides Ethiopia with strategic depth to protect it from the issues of its unstable neighbor Somalia, the desert is also home to separatist and Somali militants, which pose a threat to the Ethiopian state.