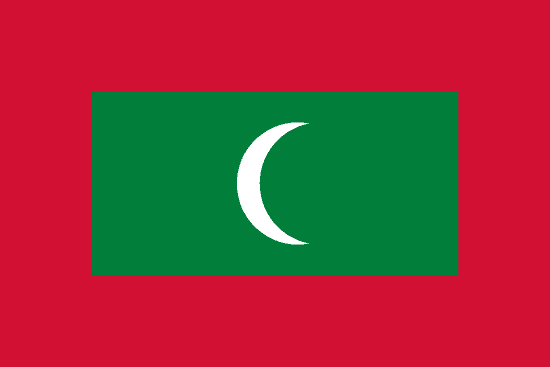 The Maldives is an archipelago located 370 miles southwest of India astride key shipping lanes in the Indian Ocean. It is the smallest and least populated country in South Asia, consisting of 1,192 coral islands grouped into 26 atolls with a total land area of 298 square kilometers (115 square miles). The Maldives has an average elevation of 7 feet and is the world's lowest-lying country. As a result, rising sea levels pose an existential threat to the Maldives and a key geographic challenge. The capital and most important city in the Maldives is Male, where one-third of the country's 417,500 people live. Islam is the state religion, while Dhivehi is the language spoken by Maldivians, comprising the vast majority of the country's demographics. The first inhabitants of the Maldives arrived from Sri Lanka and India in the fifth century B.C. Subsequently, at various points in its history, the country was under Portuguese and Dutch influence before achieving independence from its status as a British protectorate in 1965. President Maumoon Abdul Gayoom ruled the Maldives for 30 years until 2008, when a new constitution transformed the country into a constitutional republic. Aside from climate change, the Maldives' geographic challenge is to court foreign investment to build an indigenous economy in a country poorly connected by roads and bridges, and to do so as it strives to maintain sovereignty amid great power politics in the Indian Ocean region. A high-end tourism industry is a critical driver of growth in an economy traditionally dominated by fishing.