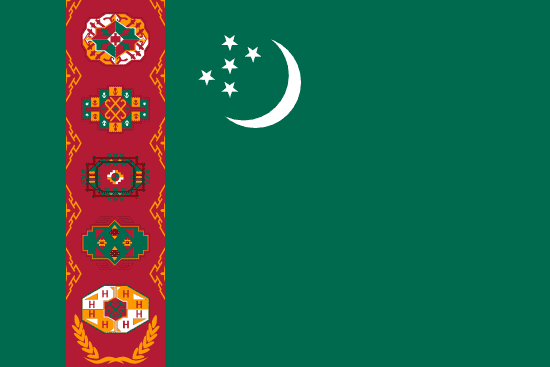 Turkmenistan is located in the southwest corner of Central Asia, bordering Kazakhstan and Uzbekistan to the north, Afghanistan and Iran to the south and the Caspian Sea to the west. Turkmenistan's defining geographic feature is the Karakum Desert, which covers over 80 percent of the country's territory. This desert landscape gives Turkmenistan a sparse population of only about 5 million. Most of the country's people are concentrated in population centers along irrigation channels and river basins in the extreme north and south of the country. One such center is Ashgabat, which serves as Turkmenistan's capital and the demographic, political and economic core of the country. The economy of modern-day Turkmenistan is dominated by natural gas production and exports. Turkmenistan has one of the world's largest reserves of natural gas, and its small internal market means most of its natural gas supplies are available for export. This wealth of energy resources makes Turkmenistan a target of interest for larger powers including Russia, China and the West. However, the country's overwhelming reliance on energy exports also makes it particularly vulnerable to swings in global energy prices. Turkmenistan's location near neighbors such as Iran, Uzbekistan and the perennially unstable Afghanistan creates substantial security concerns for the country. It has been one of the most politically centralized and externally isolated countries in the world since its independence from the Soviet Union in 1991, when Ashgabat declared itself officially neutral and opted out of any foreign military alliances. Maintaining this strategic neutrality in an unstable and dynamic neighborhood, while also managing an economy that is highly dependent on energy resources, is Turkmenistan's primary geographic challenge.